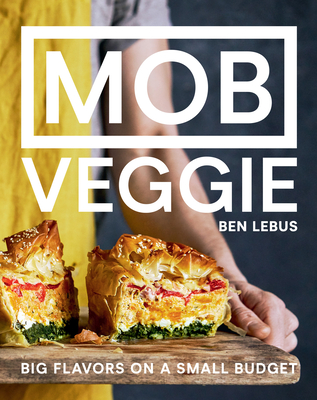 Having taken the social-media world by storm with his one-minute, how-to-make recipe videos, MOB Kitchen founder Ben Lebus is back with his second book.

Perfect for the vegetarian cook on a budget, and stuffed with delicious, easy, and accessible dishes that absolutely anyone can cook with the aim of feeding four people on a limited budget. Featuring delicious recipes such as Miso-Glazed Sticky Eggplants with Sesame Rice, Sweet Potato Gnocchi, and Jack-fruit Curry, MOB Veggie contains all the inspiration needed to make budget meals to impress friends and family anytime.

Every MOB Kitchen recipe is affordable, healthy, delicious, beautiful, and easy to make. Unlike most budget-cooking sites, MOB Kitchen doesn't make any absurd assumptions about what you have in your kitchen cupboard. All that is expected is to have salt, pepper, olive oil, and a small budget, nothing more. Each recipe also comes with a recommended soundtrack that can be scanned and played through Spotify. So get the music started, get your mob round, and get cooking!

Ben Lebus has always been passionate about food and learned to cook from his father, who ran an Italian restaurant. In college, he quickly saw that his roommates did not share his knowledge of cooking. So he devised a list of recipes that would feed four people affordably, wanting to show that it was possible to cook healthy, delicious food on a budget. He launched MOB Kitchen three months after he graduated. The "thrifty home cook's unlikely hero," according to the Daily Mail, Ben has harnessed a strategic group of supporters and collaborators, including sponsoring university sports-team kits and collaborating with major supermarket chains and dating app Bumble. MOB Kitchen has about 350,000 social-media followers.

"Having taken the social media world by storm with his one-minute, how-to-make–a-recipe videos, MOB Kitchen founder Ben Lebus is back with his second book. Great vegetarian recipes using few ingredients and recipes to feed four for around $10." —ALLTHEBEST.COM