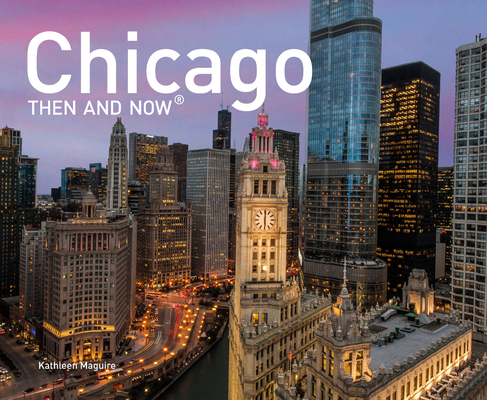 
Email or call for availability and/or price.
Historic photos of the Windy City, including some in color, are paired with their modern viewpoint to show the startling growth and dramatic changes that have transformed Chicago over the last 150 years.

Chicago is a city that through history has triumphed over nature and disaster. It has bounced back from a calamitous fire, re-engineered the flow of the Chicago River, and challenged gravity with a series of pioneering skyscrapers. Chicago Then and Now pairs archival photos with modern views to tell the story of the city's rich history.

All the key historic locations are featured, such as the Navy Pier and the Biograph Theater where gangster John Dillinger was gunned down. There are the old ballparks (Wrigley Field and Comiskey Park), the classic skyscrapers (Rookery Building and Old Colony Building), the vestiges of the famous 1893 World Fair (Museum of Science and Industry), survivors of the 1871 Great Fire (Water Tower), the grand railroad stations (Dearborn), the many bridges (State Street), stores (Marshall Field), and unique architecture (Frank Lloyd Wright home).
Kathleen Maguire has lived in Chicago her whole life and has been a resident of the city's South, North, and West Sides. She earned postgraduate degrees from the University of Illinois at Chicago and DePaul University. In her current role as a guide for Walk Chicago Tours, she brings Chicago's brilliance and magic firsthand to its visitors. She currently lives in Chicago's Logan Square.

"The mind behind the travel book Cool Chicago, Kathleen Macguire, is at it again with a second book coming out in July. Chicago Then and Now is a gorgeously crafted photographic retrospective featuring historic image of the Windy City juxtaposed with their modern-day counterparts."
—DUJOUR/DUJOUR.COM