How David Cameron Saved Scotland: ...and may yet save us all (Paperback) 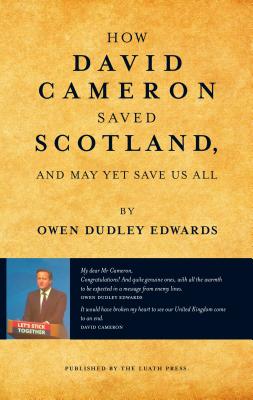 David Cameron was Prime Minister throughout the campaign for Scottish Independence. People thought if the Scots voted YES for Independence that he may lose his job. But Scotland voted NO, so where does that leave him?

As leader of the Unionist campaign, it is sensible to ask ourselves how he won the victory. One method might be to write and ask Mr Cameron how he did it. But, as Prime Minister, he may be too busy to reply, so Owen Dudley Edwards has helpfully written to inform Mr Cameron how he did it, sometimes telling him things he may not know or has only dimly guessed.

The book explains to Mr Cameron what the wilder psychiatric shores of Premiership involve, whether he knows it or not, what sort of people he recruited to gain his victory and whether they knew they were recruits, what his opponents were like and why they opposed him, how Scotland reversed the UK fall in voter interest and involvement, and why. It works out how far the victory was won on the playing fields of Eton, and how the generalissimo’s lieutenants in all three major Unionist parties did what he wanted. We hope the book leaves him purring.

Owen Dudley Edwards is Hon. Fellow of the School of History, Classics and Archaeology, at the University of Edinburgh where he taught History from 1968, having been born in Ireland and studied in the USA. His wife, Bonnie, is American and his three children are Scots. His most recent major monograph is British Children’s Fiction in the Second World War, his most recent collaboration Tartan Pimps, and he has edited several books including A Claim of Right for Scotland.