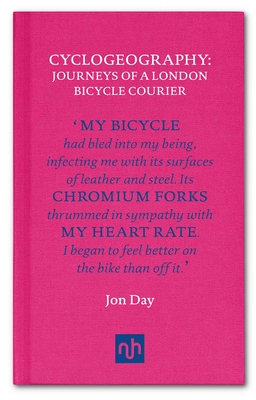 By Jon Day
Email or call for price
Backordered

Cyclogeography is about the bicycle in the cultural imagination and also a portrait of London as seen from the saddle. In the great tradition of the psychogeographers, Jon Day attempts to depart from the map and reclaim the streets of the city. Informed by several grinding years spent as a bicycle courier, he lifts the lid on the solitary life of the courier. Traveling the unmapped byways, shortcuts, and urban edgelands, couriers are the declining, invisible workforce of the city. The parcels they deliver keep things running. For those who survive the crushing toughness of the job, the bicycle can become what holds them together.

Jon Day is a writer, academic, and cyclist. He worked as a bicycle courier in London for several years and is now a lecturer in English literature at King’s College London. He writes for the London Review of Books, n+1, the New Statesman, and others publications, and is a regular book critic for the Financial Times and The Telegraph. He is a 2016 Man Booker Prize for Fiction judge.

This is a street-smart, super-sharp exploration of the ‘soft city’ as seen from the saddle; Jon Day has written a bold and clever book about the zone where capital and cycling collide. It fascinated me from first page to last.
—Robert Macfarlane

There’s a gap in travel writing, and Jon Day has just zipped into it—like a bike courier between white van and black cab. The British capital, he says, has been written about often from the perspective of the rambler and the stroller, but not much from the saddle. He’s started to make good the deficiency with Cyclogeography.
—Michael Kerr, The Telegraph

Jon Day’s ode to the bicycle takes the reader pillion from petrol-choked city to rolling dale in eloquent prose, which at best pedals in beat to the accompanying landscape.
—Nicholas Hogg, The Independent

The book is written in short, punchy chapters...Cyclogeography’s magic lies in the quality of the prose and Day’s skill in looping together disparate threads in a way that feels natural.
—John Sunyer, Financial Times

Armchair cycling turns out to be an exquisitely indolent sport—at least when one has in one’s hands a book as choice as Cyclogeography. Everything about this slender hardback makes it a pleasure to read.
—Kate Kellaway, The Observer