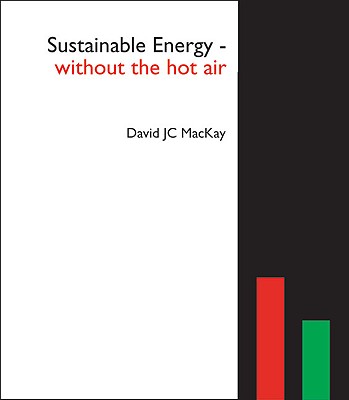 By JC MacKay
This book might be hard to find. Ask a bookseller for more information.
Out of Print

Addressing the sustainable energy crisis in an objective manner, this enlightening book analyzes the relevant numbers and organizes a plan for change on both a personal level and an international scale--for Europe, the United States, and the world. In case study format, this informative reference answers questions surrounding nuclear energy, the potential of sustainable fossil fuels, and the possibilities of sharing renewable power with foreign countries.

While underlining the difficulty of minimizing consumption, the tone remains positive as it debunks misinformation and clearly explains the calculations of expenditure per person to encourage people to make individual changes that will benefit the world at large.

If you've thrown your hands up in despair thinking no solution is possible, then read this book - it's an honest, realistic, and humorous discussion of all our energy options.

David MacKay was a Professor in the Department of Physics at the University of Cambridge, a Fellow of the Royal Society (FRS) and Regius Professor of Engineering at Cambridge University.

He studied Natural Sciences at Cambridge and then obtained his PhD in Computation and Neural Systems at Caltech - the California Institute of Technology. He returned to Cambridge as a Royal Society research fellow at Darwin College. He is internationally known for his research in machine learning, information theory, and communication systems, including the invention of Dasher, a software interface that enables efficient communication in any language with any muscle. He taught Physics in Cambridge and devoted much of his time to public teaching about energy. He was a member of the World Economic Forum Global Agenda Council on Climate Change.

From 2009 to 2014 he was Chief Scientific Advisor to the UK Department of Energy and Climate Change ("DECC") and in the 2016 New Year's Honours List was awarded a  knighthood for services to Scientific Advice in Government and Science Outreach. He passed away in 2016 at the age of 48.

"If someone wants an overall view of how energy gets used, where it comes from, and the challenges in switching to new sources, this is the book to read."  —Bill Gates, chairman, Microsoft

"I would choose Sustainable Energy as a text over its competitors because MacKay has moved the energy discussion in the direction where energy alternatives can be considered quantitatively."  —American Journal of Physics

"A new academic book written by David MacKay, a physics professor at the University of Cambridge, is being hailed by some as a "game changer": a text that could revolutionize popular thinking about our future energy needs and how we could supply them."  —guardian.co.uk

"May be the best technical book about the environment that I've ever read.  This is to energy and climate what Freakonomics is to economics."  —boingboing.net

"The main text of his book is readable (and witty) and its technical appendices bristle with equations. If the planet and its people are the patient, MacKay's book is the the lab results, temperature chart and electrocardiogram." —The New York Review of Books (April 26, 2012)

"This is a brilliant book that is both a racy read and hugely informative . . . It shows . . . how cars might become far more efficient but why planes cannot."  —David Newbery, director, Electricity Policy Research Group, University of Cambridge

"A tour de force . . . As a work of popular science it is exemplary . . . For anyone seeking a deeper understanding of the real problems involved [it] is the place to start."  —Economist.com

"If only all scientists could adopt this approach, then perhaps there would be no need for politically motivated TV documentaries."  —The Sun