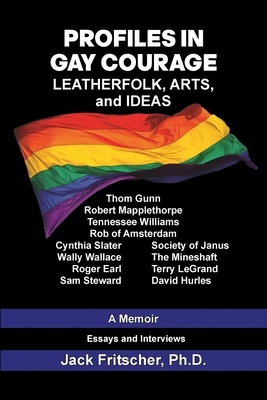 Jack Fritscher, the founding San Francisco editor-in-chief of Drummer magazine and curator of the Drummer Archives since 1977, is the award-winning author of twenty books popular with readers and researchers including memoirs of his bicoastal lover Robert Mapplethorpe, his friend Larry (Leatherman's Handbook) Townsend, and his "gentleman caller" Tennessee Williams. His new Profiles is holistic gay history written by a New Journalist who lived the life.

With his first gay writing (on James Dean) published in 1962, Fritscher at 83 reaches across 60 years of gay life into his journals and heart to examine our lost midcentury world as he did in Some Dance to Remember: A Memoir-Novel of San Francisco 1970-1982 which The Advocate called the "Gay Gone With the Wind."

GMSMA president-historian David Stein confirmed to the Leather Leadership Conference that "Fritscher, one of the great Drummer editors, seems to have been everywhere and done everyone during the 'good old days' of leather culture."