The Trouble with Markets: Saving Capitalism from Itself (Paperback) 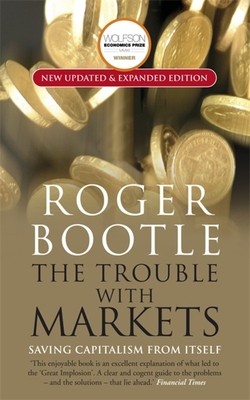 By Roger Bootle
Email or call for price
Hard to Find

In this completely updated edition of this prescient and widely acclaimed book, the latest financial crisis is explained in a historical context. The Great Depression and other periods of economic downturn are investigated and exposed, as Roger Bootle walks readers through the roles of regulators and bankers, and blames financial crisis on the idea that markets can be left alone. Bootle extends his analysis to include the current sovereign debt crisis, the plight of the euro, the intensity of the squeeze on public spending and consumer incomes, and the boom in commodity prices and gold. Bootle lays out a plan for reform of the financial system and a strategy to get us out of the current mess. And he highlights a course for investors to steer through these choppy waters.

One of Britain's best-known economists, Roger Bootle runs Capital Economics, Europe's largest macroeconomics consultancy, which he founded. Roger appears frequently on television and radio and is also a regular columnist for the Daily Telegraph. In the Comment Awards 2012 he was named Economics Commentator of the year. He is the author of widely acclaimed books including: The Trouble with Markets, Money for Nothing and The Death of Inflation. Roger is also a Specialist Adviser to the House of Commons Treasury Committee. He was one of the previous Conservative government's "Wise Men." In July 2012, Roger and a team from Capital Economics won the prestigious Wolfson Economics Prize.

Compelling prescriptions from an economist unusually able to speak with authority - because unlike most of his peers, Bootle spotted that the boom was unsustainable.
—Robert Peston, BBC Business Editor and author of Who Runs Britain?, -

This book will stand out in the explosion of financial crisis literature. Roger Bootle is one of the top, practical economists in the financial world but he is not afraid to tackle the bigger, deeper questions around the future of capitalism, the role of markets and government.
—Vince Cable, MP, Business Secretary and author of The Storm, -

This enjoyable book ... is an excellent explanation of what led to the "Great Implosion" ... what marks this book out is the admirable care that Bootle has taken to address concerns that a reader who is new to the topic might have. Bootle is also diligent in shooting down some of the most common canards that have flapped their way through the crisis. A clear and cogent guide to the problems - and the solutions - that lie ahead.
—Financial Times, -

Bootle's book deserves attention because he has been broadly right about this cycle: he warned of the dangers of the asset bubble and the likelihood of the downturn being much more serious than forecasters predicted, but equally he was not one of the "depressionists" ... where Bootle is helpful is in his tone of moderation.
—The Independent, -

Roger Bootle is one of the best interpreters of modern capitalism around. This account of the crisis and what it means is as important as it is accessible.
—Will Hutton, Executive Vice Chair, The Work Foundation and author of the bestselling The State We're In, -

Without any equations but with many challenging ideas, The Trouble with Markets is an excellent introduction to the big questions that surround what Bootle calls the Great Implosion of the last few years ... He expresses his own views succinctly and presents opposing arguments fairly ... the book is about as good as it gets.—The Business Economist, -

Ultimately, Bootle offers a way out of this mess that could tame the markets and make them work for the benefit of all. Capitalism, he thinks, can be saved from itself - but only if policymakers respond to the challenge.
—The Observer, -

In his last book Money for Nothing, Roger Bootle predicted with great accuracy the property crash and subsequent financial crisis. In The Trouble with Markets, he offers us a way out of the almighty mess that excessive debt created. It should be made compulsory reading for all policymakers.—Jeff Randall, Sky News business presenter, -

A brilliant book that puts markets in stunning perspective. Once again, Roger Bootle tackles, head on, some of the toughest economic questions of our time. An extraordinarily penetrating and absorbing analysis.
—The late Sir Brian Pitman, former Chairman, Lloyds TSB Group, and senior advisor to Morgan Stanley, -

This book has a fair claim to the status of "must read." Clearly and compellingly written, provocative in its critique and with many suggestions for reform, The Trouble with Markets will command attention from practitioners and lay readers alike.—The Spectator, -

A short, reliable analysis of the crisis in language that the intelligent general reader can understand.
—Robert Skidelsky, author of Keynes: The Return of the Master, -

A good run across the desolate battlefield of financial markets after two years of meltdown. Bootle writes fluently, his instincts are sound and his criticisms mainly well-based.
—Management Today, -