Culture Strike: Art and Museums in an Age of Protest (Hardcover) 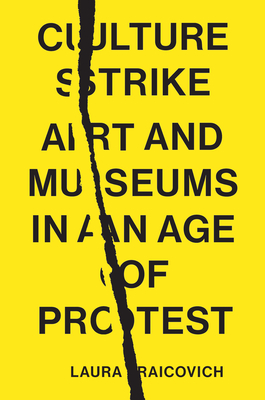 Museum curator Raicovich examines the myth of neutrality in art museums—every attempt at depoliticizing museums reinforces dominant systems of oppression. She evaluates questionable funding sources, repatriation, antiracist programming, and hiring practices. She then provides equitable alternatives. This title doubles as a “How To” manual for activists, artists and curators.

As director of the Queens Museum, Laura Raicovich helped turn that New York municipal institution into a center of activist art, organizing high-powered exhibitions that were also political protests. Then in January, 2018, she abruptly resigned, after a dispute with the Queens Museum board and city officials became a public controversy--she had objected to the Israeli government using the museum for a political event featuring vice president Mike Pence.

Raicovich's exit was only one of a string of political controversies involving museums, directors, and curators. Her resignation was followed by the firing, for example, of MOCA LA's Helen Molesworth and the firing of María Inés Rodriguez by the Bordeaux Contemporary Art Museum. And protests of museum funding (for example, the Guggenheim accepting Sackler family money) and boards (for example, the Whitney appointing tear gas manufacturer Warren Kanders)--to say nothing of demonstrations over artworks--have roiled museums in recent years.

In this book, Raicovich explains some of the key museum flashpoints, but she also provides historical context for the current controversies. She shows how art museums arose as colonial institutions bearing an ideology of neutrality that masks their role in upholding capitalist values. And she suggests how museums can be reinvented to serve better, public ends.

Laura Raicovich was president and executive director of the Queens Museum, and prior to that was with Creative Time and Dia Art Foundation. She is a recipient of both the Rockefeller Foundation Bellagio Fellowship and the inaugural Emily H. Tremaine Journalism Fellowship for Curators at Hyperallergic. She co-edited Assuming Boycott: Resistance, Agency, and Cultural Production and is the author of At the Lightning Field and A Diary of Mysterious Difficulties.