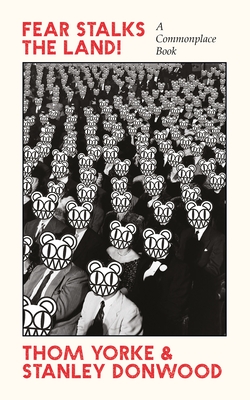 In which the writings of the authors Thom Yorke and Stanley Donwood are gathered together.

This commonplace book includes faxes, notes, fledgling lyrics, sketches, lists of all kinds and scribblings towards nirvana, as were sent between the two authors during the period 1999 to 2000 during the creation of the Radiohead albums Kid A and Amnesiac. This is a document of the creative process and a mirror to the fears, portents and fantasies invoked by the world as its citizens faced a brave new millennium.

A celebration of the Radiohead albums Kid A and Amnesiac,
this is the first book of writing from Thom Yorke and Stanley Donwood. It is
publishing alongside a full-colour book of artwork, Kid A Mnesia. A must-have for all Radiohead fans. Fear Stalks the Land is a pocket-sized A-format book
with French flaps. The cover is printed 5 colours on uncoated stock and
debossed. The book is 176 pages long and features black and white text and more
than forty black and white images by the authors.

Thom Yorke is a musician, composer and artist, best known as the lead vocalist and songwriter of the band Radiohead. Stanley Donwood is a graphic designer, artist and writer. He has published three collections of stories and has worked with Radiohead since 1994, producing all the artwork for their albums and promotional materials.