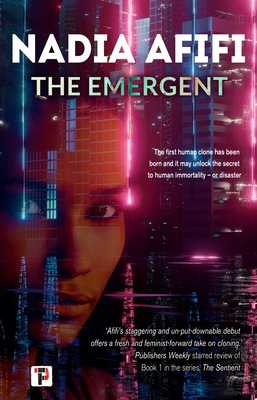 Scintillating follow-up to 'The Sentient', which the Publishers Weekly starred review called a "staggering and un-put-downable debut, offers a fresh and feminist-forward take on cloning."

"Afifi’s staggering and un-put-downable debut offers a fresh and feminist-forward take on cloning [...] This riveting debut is a must-have for any sci-fi fan."— Publishers Weekly starred review of Book 1 in the series

Amira Valdez’s adventures continue in the sequel to The Sentient, as she finds herself in unprecedented danger. The ruthless new leader of the fundamentalist Trinity Compound seeks to understand his strange neurological connection with Amira and unleash an army on an unstable North America. The first human clone has been born, but thanks to the mysterious scientist Tony Barlow, it may unlock the secret to human immortality – or disaster. Together, Amira and Barlow form an uneasy alliance in pursuit of scientific breakthroughs and protection from shared enemies. But new discoveries uncover dark secrets that Barlow wants to keep hidden.

Nadia Afifi is a science fiction author who lives in Denver, Colorado. Although born in the United States, she grew up in Saudi Arabia and Bahrain before studying journalism and business in college. When she isn’t writing, she loves to hike, run and plan her next overseas trip.

Praise for The Sentient, Book 1 in the series:

"Afifi’s staggering and un-put-downable debut offers a fresh and feminist-forward take on cloning [...] This riveting debut is a must-have for any sci-fi fan." — Publishers Weekly starred review

"Afifi’s first novel is a science fiction noir [...] The worldbuilding is a particular strength, as every locale feels well-realized and lived-in. This is an excellent book for fans of Mira Grant and Michael Crichton, or readers who love a thrilling narrative and welcome moral and philosophical questions in their science fiction." — Booklist

"Nadia Afifi is a brand-new voice, and one you should become familiar with [...] Exciting, mesmerizing, and full of cutting-edge science, 'The Sentient' is an excellent beginning to what’s sure to be a successful career." — Analog SF

“Honestly, this book was big on character, big on plot, and a well written science fiction piece, all good things I love as a bookworm and a scientist!” — The Nerd Daily

"A piece of ethical excellency, a cry of freedom, and a thought-provoking debut is what Nadia Afifi has delivered for those who love to plunge into the gray morality of stories, as well as the riveting explorations of science fiction and the theory of the multiverse." — Bookwyrm's Guide to the Galaxy