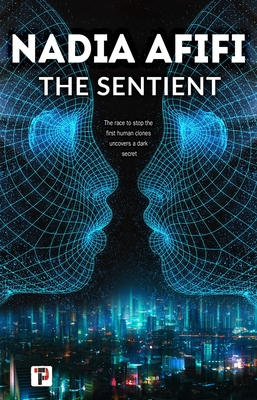 Nadia Afifi gives us a future that is both familiar and utterly strange. A cloning project is threatened by religious fundamentalist who may be in league with project insiders. The new researcher assigned to assist meets an intelligence operative who may not be operating strictly by the book and finds herself in a fight for the future against a past she'd thought she had escaped.

— From Mark
"Afifi’s staggering and un-put-downable debut offers a fresh and feminist-forward take on cloning [...] This riveting debut is a must-have for any sci-fi fan."— Publishers Weekly starred review

Included in Library Journal's "Rise of the Monsters: Top Horror Titles and Trends Coming This Season

Amira Valdez is a brilliant neuroscientist trying to put her past on a religious compound behind her. But when she’s assigned to a controversial cloning project, her dreams of working in space are placed in jeopardy. Using her talents as a reader of memories, Amira uncovers a conspiracy to stop the creation of the first human clone – at all costs.
As she unravels the mystery, Amira navigates a dangerous world populated by anti-cloning militants, scientists with hidden agendas, and a mysterious New Age movement. In the process, Amira uncovers an even darker secret, one that forces her to confront her own past.

FLAME TREE PRESS is the new fiction imprint of Flame Tree Publishing. Launched in 2018 the list brings together brilliant new authors and the more established; the award winners, and exciting, original voices.
Nadia Afifi is a science fiction author who lives in Denver, Colorado. Although born in the United States, she grew up in Saudi Arabia and Bahrain before studying journalism and business in college. When she isn’t writing, she loves to hike, run and plan her next overseas trip.

"Afifi’s staggering and un-put-downable debut offers a fresh and feminist-forward take on cloning [...] This riveting debut is a must-have for any sci-fi fan."

"Afifi’s first novel is a science fiction noir [...] The worldbuilding is a particular strength, as every locale feels well-realized and lived-in. This is an excellent book for fans of Mira Grant and Michael Crichton, or readers who love a thrilling narrative and welcome moral and philosophical questions in their science fiction."

"Nadia Afifi is a brand-new voice, and one you should become familiar with [...] Exciting, mesmerizing, and full of cutting-edge science, 'The Sentient' is an excellent beginning to what’s sure to be a successful career."
— Analog Science Fiction & Fact

“Honestly, this book was big on character, big on plot, and a well written science fiction piece, all good things I love as a bookworm and a scientist!”
— The Nerd Daily

"A piece of ethical excellency, a cry of freedom, and a thought-provoking debut is what Nadia Afifi has delivered for those who love to plunge into the gray morality of stories, as well as the riveting explorations of science fiction and the theory of the multiverse."
— Bookwyrm's Guide to the Galaxy