Neoliberal Transformations of the Italian State: Understanding the Roots of the Crises (Transforming Capitalism) (Hardcover) 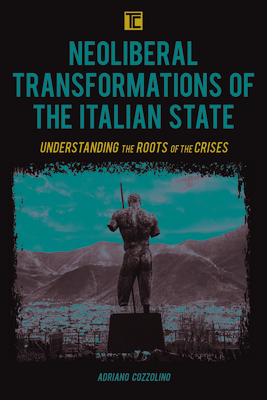 By Adriano Cozzolino
$132.00
Not on our shelves at the moment, but we will order it for you.

'The book is an exploration, on both theoretical and empirical grounds, into the nature and the transformation of the state in the neoliberal era. Nowadays, a widespread crisis of legitimation affects the institutions and authority of the state; similarly, and especially after the Great Crisis of 2008 to present, the European project is increasingly questioned by populist and neo-nationalist forces, which politically advance in the state and society, and promote further coercive-oriented reconfiguration of state powers and apparatus. The 'nationalist international', the 'new populists' and/or the 'rise of new international fascism' are questions on the verge of international scholarship and political debate. However, many of these studies often miss the specificity and critical importance of the study of the state and of state (institutional and ideological) powers; even more importantly, the phenomenon of populism/neo-authoritarianism is interpreted by the mainstream as a clear break with traditional centrist parties, with the result of neglecting the past authoritarian tendencies that accompany the entire history of neoliberalism. This book aspires to be a guide for political activist and policy-makers: specifically, by showing how the state is of critical importance to the making of neoliberalism in institutional and cultural terms, it also aims to rethink the state as the arena of politics and, accordingly, as the key site to promote alternatives to neoliberalism.