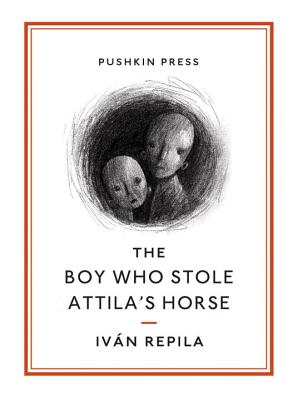 Poetic and absurd, The Boy Who Stole Attila's Horse possesses the power of myth. It might be a quick read, but the story resonates for a long time.

— From Jeff
'It looks impossible to get out,' he says. And also: 'But we'll get out.'
Two brothers, Big and Small, are trapped at the bottom of a well, stalked by madness and with no means of escape. Struggling for sustenance and clinging to sanity, Big forges a plan to free his little brother. Fast-paced and rich in metaphor, this extraordinary new story poses questions of fight, survival and solidarity when people are faced with devastation.

Powerful, disquieting and highly original, Repila's unique allegory explores with bravery and emotion the depths of human desperation and, ultimately, our almost unending capacity for hope.
Iván Repila was born in Bilbao, Spain in 1978. He worked in advertising, graphic design and editorial, before turning to writing with his highly acclaimed debut novel, Despicable Comedy. Celebrated in his homeland Spain, and praised for the originality and depth of his prose, his second novel, The Boy Who Stole Attila's Horse, is his first book to appear in English.
Translated from the Spanish by Sophie Hughes.

"Repila's first book to be translated to English is a provocative and focused parable... brief and brutal… Hughes's vibrant translation aids Repila's lyrical descriptions of anguish and hope, and the narrative's intelligence and depth make it a gripping read." — Publishers Weekly

"short, intense. . . realism is not the order of the day, but rather the distorted, disturbing exaggerations of expressionism." — The Guardian

"A story beguiling in its fairytale-like simplicity and absolute distance from any recognizable reality... With shocking precision The Boy Who Stole Attila’s Horse reveals what happens when two innocent individuals are dispossessed of everything and made to live like terrorized animals. Repila’s language, clogged with maggots and tumors, festering wounds and leaking brains, gives this book an overwhelming pungency (praise must be given to Sophie Hughes for a translation nimble enough to turn on a dime and powerful enough to knock us out with its startling images)." — BOMB Magazine

"The Boy Who Stole Attila’s Horse, Iván Repila’s second novel and his first to appear in English, is short, sharp and blackly humorous... Sophie Hughes’ translation renders it with a brutal force... The push-and-pull is essential. 'Small goes on dying for days, and his brother goes on keeping him alive. As if they were playing.' This is Repila’s game, and he’s good at it... Repila moves again into that mad, semi-religious tone, that language of icons and saints, of fire and brimstone, and in the darkness shows us the sparks of an era to come." — Full Stop Magazine

"High art, an imaginative allegorical work of breathtaking yet restrained lyric power. . . Repila’s prose is clinical, precise and beautiful. His sinuous, lilting Spanish has been magnificently rendered into English by Sophie Hughes in a faultless, rhythmic translation that enables the bleak narrative to soar like an epic poem." — Irish Times

"Here is a story conceived to leave its mark, to be felt in the pit of one's stomach" - Librairie L'Ouvre-Boîte

"This is a masterpiece concentrated into 110 pages...This is the sort of book that you don't put down, and leaves you with a knot in your stomach" - Clara Dupont-Monod, France Inter

"Suffocation and disgust are the dominant impressions, and yet... this book is a charm... Iván Repila's language is superb, it carries with it all the spells of fairytales with their ogres, wolves and evil stepmothers, but it also manages to evoke the much less fantastical universe of camps, prisons and caves where hostages waste away" - Éric Chevillard, Le Monde

"You will emerge from it changed, grown up... an essential novel... a masterpiece" - La soupe de l'espace

"It's been a long time since I have read such an impressive book. With its rich and wise prose, combination of mannerism and enlightenment, this broken tale of what makes us tedious and atrocious is also a harsh song of love" - Tendencias 21

"A vivid novel, full of metaphors and symbols about cooperation, the effort to survive, the world's brutality, and solidarity. All things that remind us of present and universal circumstances" - Revista de letras

"A brutal, Beckett-like tale. Its end is cathartic, hopeful and violent. It is utopian, and reminds us that language is the only thing that can save us: because language is everything" - La Vanguardia

"A seemingly traditional story which works on different levels of reading. A precise novel, solid and disquieting, veiling a deep wisdom" - El País