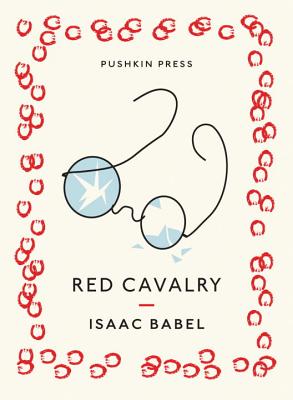 What happens when a first-rate poet embeds with a corps of hapless soldiers and follows them into battle? Red Cavalry. Poignant, lyrical, and brutal, Babel was executed because of what he wrote in this interconnected series of stories.

— From Jeff
Based on Babel's own diaries that he wrote during the Russo-Polish war of 1920, Red Cavalry is a lyrical,  unflinching and often startlingly ironic depiction of the violence and horrors of war. A classic of modern fiction, the short stories are as powerful today as they were when they burst onto the Russian literary landscape nearly a century ago. The narrator, a Russian-Jewish intellectual, struggles with the tensions of his dual identity: fact blends with fiction; the coarse language of soldiers combines with an elevated literary style; cultures, religions and different social classes collide. Shocking, moving and innovative, Red Cavalry is one of the masterpieces of Russian literature.

Pushkin Collection editions feature a spare, elegant series style and superior, durable components. The Collection is typeset in Monotype Baskerville, litho-printed on Munken Premium White Paper and notch-bound by the independently owned printer TJ International in Padstow. The covers, with French flaps, are printed on Colorplan Pristine White Paper. Both paper and cover board are acid-free and Forest Stewardship Council (FSC) certified.
Isaac Babel (born 1894) was a short-story writer, playwright, literary translator and journalist. He joined the Red Army as a correspondent during the Russian civil war. The first major Russian-Jewish writer to write in Russian, he was hugely popular during his lifetime, respected by the Communist authorities and the public alike. But he fell to Stalin's purges, and was murdered in 1940, at the age of 45.

Boris Dralyuk is Assistant Professor in the Department of Slavic Languages and Literatures at UCLA. He has translated Leo Tolstoy's How Much Land Does a Man Need and co-translated Polina Barskova's The Zoo in Winter: Selected Poems, and is the co-editor, with Robert Chandler and Irina Mashinski, of the forthcoming Anthology of Russian Poetry from Pushkin to Brodsky.

"One of the great stylistic accomplishments of the 20th century... [and] Mr. Dralyuk’s is simply the best translation available." — The Wall Street Journal

"A classic series of wartime sketches in a translation that emphasizes their lyricism and dark comedy. . . Though the stories are brief and deliver a clear message about the frustrations of battle, Babel's rhetoric is never plainly parable- or fablelike; he uses a blunt realism to sketch out scenes that can have a variety of resonances. Writing about war has changed with the times, but war hasn't, and these stories from nearly a century ago remain grimly current. Short but emotionally deep studies of life during wartime." — Kirkus Reviews (Starred Review)

"Red Cavalry remains one of the most powerfully detailed and revealing depictions of a legendary people living through one of the most famously violent experiments of the modern age. . . Babel’s characters are stoic yet passionate, savage yet sophisticated, prone to blind, obstinate rage in one moment, and to sensitive reflection and acts of kindness in the next." — MAKE Literary Magazine

"Red Cavalry is one of Russia’s great books, up there with Tolstoy, Dostoyevsky, Chekhov, Bulgakov, Turgenev, Gogol, Pushkin, Gorky, Solzhenitsyn. Babel’s brief career is marked by the depth, truth, and vitality of what he was able to complete. Boris Dralyuk’s translation will earn Babel new admirers and place him securely in this canon for readers of Russian literature in English." — Los Angeles Review of Books

"Casual violence ('[he] grabbed her hair, bent back her head and smashed her face with his fist') alternates with beauty, sometimes in the same sentence ('We fled without staining our swords crimson with the wretched blood of traitors')… This translation is of the first 1926 edition, before censorship and the author’s own revisions altered the text." — Publishers Weekly

"Babel’s narrative concision and his ability to shift registers, from the prosaic to the poetic and back, are riveting. . . Babel prefigures the sensibilities of David Simon, juxtaposing grit, gore, humor, and beauty—in a very different kind of ghetto."  — Daniel Berchenko, Publishers Weekly Staff Pick

"I had read Babel before, but never realized what I was missing. This was the first time I felt that I really had read Babel. It was just a total experience." — Corey Robin, Cullman Center Fellow, for New York Public Library blog

"Babel was a literary chameleon – able to vividly capture the voices and characters he met during the brutal years of the Polish-Soviet War (1919-21), where nations barely born were fighting over borders soon to be forgotten. The stories here are gory and profane, funny and disturbing, filled with the blood, anguish and up-close horrors of one of the last wars in Europe fought with sabers and horses... Red Cavalry is an indictment of the banality of armed conflict through the voices of commissars and idealists, revolutionaries and soldiers alike. It should be required reading in every high school, in every nation where people still think wars are worth fighting." - Paul Richardson, Russian Life Magazine