She Holds Up the Stars (Paperback) 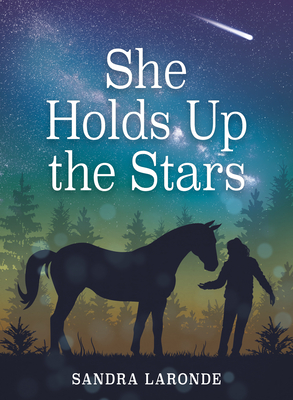 She Holds Up the Stars (Paperback)

"This compelling novel will introduce young readers to the complexities of modern indigeneity and resilience."--Eden Robinson, author of Monkey Beach and Son of Trickster.

A young Indigenous girl searching for a sense of home finds strength and courage in her gifts, her deepening connection to the land, and her own cultural awakening in this moving coming-of-age story.

The last thing that twelve-year old Misko wants to do is to move away from the city to spend time on the rez with her grandmother. And yet she feels strangely compelled to go, drawn by a pull that she feels in her dreams. Maybe she can finally find out what happened to her mother, who mysteriously disappeared when Misko was four years old.

Misko's relationship to the rez shifts when she encounters a spirited horse named Mishtadim. But Mishtadim is being violently broken by the rancher next door and his son Thomas. Misko and Thomas clash at first, only to find themselves drawn together by the wild horse. As Misko slowly discovers her unique bond with Mishtadim, she feels a sense of belonging and comes to understand the beauty of the world all around her.

She Holds Up the Stars is a powerful story of reconciliation and the interwoven threads that tie us to family, to the land, and to our own sense of self.

SANDRA LARONDE is originally from the Teme-Augama-Anishinaabe (People of the Deep Water) in Temagami, Northern Ontario. An accomplished arts innovator and cultural leader, Sandra has conceived, developed, produced, and disseminated many award-winning productions. She is the founder, and Executive and Artistic Director, of Red Sky Performance, www.redskyperformance.com, a leading company of contemporary Indigenous performance worldwide.