Water's Children: Celebrating the Resource That Unites Us All (Hardcover) 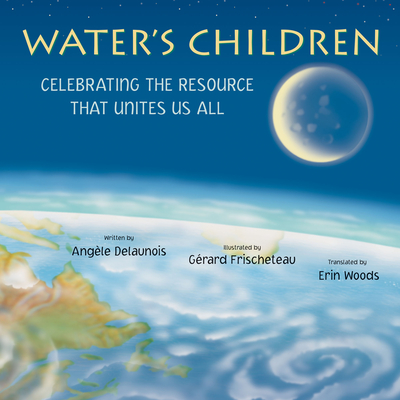 Twelve children from around the world describe how water appears in their environment, and what it means to them. Their differing experiences are united by the phrase "water is life," translated into each of their languages.

Around the world, water appears in many forms: a snowflake, an oasis, the stream from a faucet, monsoon rain. In Water's Children, twelve young people describe what water means to them. The descriptions are as varied as the landscapes the speakers inhabit, but each of them also expresses, in their own language, a universal truth: Water is life.

Accompanied by the glowing illustrations of G rard Frischeteau, Water's Children is a celebration of our world's most precious resource and will encourage thoughtful discussion among young readers and listeners. The narrators' words, lyrically written by Ang le Delaunois, offer emotional and sensory details that bring their experiences to life. On the final page, a guide identifies the languages in which the phrase "water is life" appears in water marks on each spread throughout the book, with thanks to the individuals who provided the translations, helping to craft this truly global story.

Originally published in French and nominated for the prestigious TD Canadian Children's Literature Award, Water's Children has now been translated into six languages in eight countries around the world.