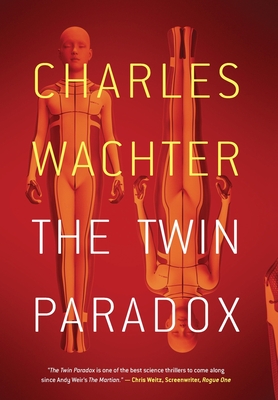 "Once again, and amazingly enough, Charles Wachter manages to meet us where we are in the uncertain, ever-shifting moment." -Wesley Morris, Critic at Large, The New York Times

"It's a rollercoaster of fun."-Charles Duhigg, bestselling author of The Power of Habit and Smarter Faster Better

With ten years passing for every three minutes on a remote stretch of Texas coast, planes fall out of the sky, evolved species are on the hunt, and people die inside one of the most vicious ecosystems ever grown-all a result of the government's efforts to slow down time.

A lot can happen in ten years. That's the point. Governments are always racing for supremacy, for scientific breakthroughs, for technological advantages-and these things take time.

Until something goes wrong.

With the grounded yet massive world building of READY PLAYER ONE, thrilling scientific questions of JURASSIC PARK, and the time-bending teen drama of BEFORE I FALL, Wachter's THE TWIN PARADOX is a brilliantly plotted tale that is both intimate and massive, relentless yet deliberate, and explores the themes of self-acceptance, self- confidence, and natural selection in a richly hued and unforgettable world. Ultimately the eternal question of Nature versus Nurture is boiled down into this fast-paced thriller told over the course of five days and culminates in one single question:

Do we get to choose who we are?

MORE PRAISE FOR THE TWIN PARADOX

"The Twin Paradox is one of the best science thrillers to come along since Andy Weir's The Martian." -Chris Weitz, Screenwriter, Rogue One

"It's a cracking adventure and gallops along at break-neck speed." -Jonathan Oliver, Author The Language of Beasts

"This book is filled with surprises, intrigue, and lots of dark fun. Loved it." -Jon Turteltaub, Director, The Meg & National Treasure