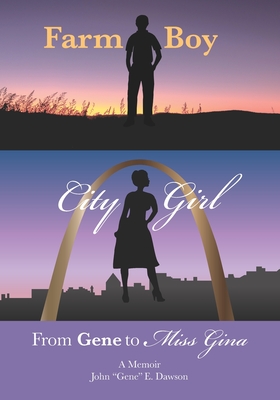 Farm Boy, City Girl: From Gene to Miss Gina details John "Gene" E. Dawson's life growing up in Depression-era Iowa in a poor farming Irish-Catholic family and his adult years spent living on the LGBTQ cultural edge in Cedar Rapids, Iowa, and St. Louis. The book offers a rare glimpse into the Mid-20th Century history of both rural Iowa and of LGBTQ individuals in Middle America--told by one who was there. Part One, Farm Boy 1931-1949: Gene recounts his years growing up in the Great Depression, moving with his family from rental farm to rental farm until his parents could afford to purchase their own land and home. Life was difficult and often brutal for anyone during this time, but especially so for a gender-fluid gay child/teenager. Part Two, Transition and Tragedy 1950-1959: Gene initially leaves the farm and begins transitioning into his new life as a gay man in the cities of Cedar Rapids and St. Louis, adopting the "city girl" persona of Gina. But the tragic accidental death of his mother forces him to move back to his family's home in Iowa where he faces gut-wrenching family drama and the loving burden of helping to raise his three younger brothers. Part Three, City Girl 1960-: Gene returns to Cedar Rapids before finally moving on to live an open, full existence as Miss Gina in St. Louis. Even in the city though, life was quite hard for openly gay men, and Gene recounts multiple harrowing tales involving the brutality of police, gay bar life, and the unsung heroism of Midwestern LGBTQ people--years before the famous Stonewall riot in New York City.