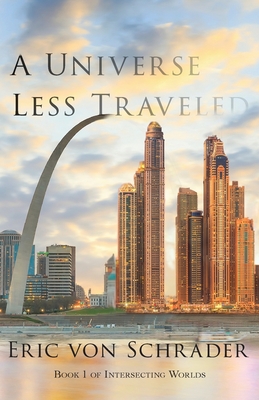 By Eric Von Schrader
List Price: $18.99
Our Price: $16.99
(Save: $2.00 11%)
On Our Shelves Now
(This book cannot be returned.)
What if there were another world, almost like ours, but not quite? It brushes up against us, like the tail end of a dream, but stays just barely out of reach.What if you found a way to go there?Billy Boustany stumbles upon the ability to slip into a surprising new version of his sleepy midwestern city. He begins a journey that is most fun he's had in years. Then it turns into an obsession that upends his life, his family, and everything he knows.A Universe Less Traveled tells Billy's story, framed by tales of other accidental travelers to this mysterious city, and provides a glimpse into an alternate history of the twentieth century.Looking for an escape from the troubles of his failing business, Billy discovers a teeming metropolis with iridescent skyscrapers and throngs of immigrants and tourists from all over the world. As he explores, he meets peculiar allies and experiences raucous celebrations. Billy questions his sanity as he struggles to make sense of this bizarre world. Though he fears screwing up his adventure, he lets his college student daughter in on the secret. Together they go further into this amazing place, until they reach the ultimate destination, a magnificent city of Native Americans that has sprung up at an ancient site. There she begins a relationship with a handsome young man with a startling plan.Billy also meets a formidable enemy - the Knights, a shadowy organization with a mission to keep people like him out of their world. They reveal how the two worlds diverged a century ago and warn him to stay away at all costs.When his daughter disappears at the hands of the Knights, Billy and his wife go on a frantic search to find her in the other city. It leads to heartbreak, then to a new beginning.