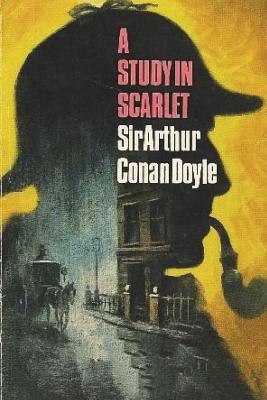 This is book number 1 in the Sherlock Holmes series.

A Study in Scarlet was written in 1886 and published in Beeton's Christmas Annual in 1887 by Arthur Conan Doyle. Doyle was rejected three times by publishers; Ward, Lock, and Company finally accepted it in 1886 with the caveat of it delaying publication until the following year because the market was flooded with "cheap fiction". It was the first of Doyle's Sherlock Holmes tales, and only one of four full-length novels featuring the character.

Sir Arthur Ignatius Conan Doyle, DL (22 May 1859 - 7 July 1930) was a Scottish author most noted for his stories about the detective Sherlock Holmes, which are generally considered a major innovation in the field of crime fiction, and the adventures of Professor Challenger. He was a prolific writer whose other works include science fiction stories, historical novels, plays and romances, poetry, and non-fiction. Conan was originally a given name, but Doyle used it as part of his surname in his later years.