Robinson Crusoe: A novel by Daniel Defoe about a castaway who spends 28 years on a remote tropical desert island encountering cannibals (Paperback) 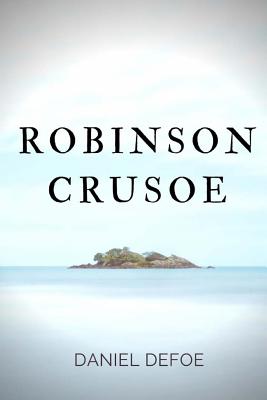 Robinson Crusoe is a novel by Daniel Defoe, first published on 25 April 1719. This first edition credited the work's fictional protagonist Robinson Crusoe as its author, leading many readers to believe he was a real person and the book a travelogue of true incidents. It was published under the considerably longer original title The Life and Strange Surprizing Adventures of Robinson Crusoe, Of York, Mariner: Who lived Eight and Twenty Years, all alone in an un-inhabited Island on the Coast of America, near the Mouth of the Great River of Oroonoque; Having been cast on Shore by Shipwreck, wherein all the Men perished but himself. With An Account how he was at last as strangely deliver'd by Pyrates. Epistolary, confessional, and didactic in form, the book is a fictional autobiography of the title character (whose birth name is Robinson Kreutznaer)-a castaway who spends years on a remote tropical island near Trinidad, encountering cannibals, captives, and mutineers before being rescued. The story is widely perceived to have been influenced by the life of Alexander Selkirk, a Scottish castaway who lived for four years on the Pacific island called "M's a Tierra" (in 1966 its name was changed to Robinson Crusoe Island), Chile. However, other possible sources have been put forward for the text. It is possible, for example, that Defoe was inspired by the Latin or English translations of Ibn Tufail's Hayy ibn Yaqdhan, an earlier novel also set on a desert island. Another source for Defoe's novel may have been Robert Knox's account of his abduction by the King of Ceylon in 1659 in "An Historical Account of the Island Ceylon," Glasgow: James MacLehose and Sons (Publishers to the University), 1911.

Daniel Defoe was born in London in 1660. He worked briefly as a hosiery merchant, then as an intelligence agent and political writer. His writings resulted in his imprisonment on several occasions, and earned him powerful friends and enemies. During his lifetime Defoe wrote more than 250 books, pamphlets, and journals, and traveled widely in both Europe and the British Isles. Among his most famous works are Moll Flanders and A Journal of the Plague Year. Though Defoe was nearly 60 before he began writing fiction, his work is so fundamental to the development of the novel that he is often cited as the first true English novelist. He is also regarded as a founding father of modern journalism and one of the earliest travel writers. Daniel Defoe died in 1731.