Super Stupid: Why The Educated Elite Are So Wrong So Often About So Many Things (Paperback) 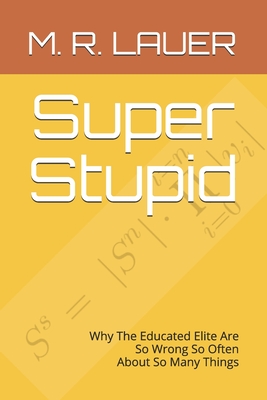 Normal stupidity, super stupidity, and plain, unadorned, everyday stupidity are all legitimate, but different kinds of stupidity. It may sound strange, but it turns out that stupidity really does come in different flavors that aren't all equally stupid - some of them are far more serious and dangerous than others.

Super stupidity breeds on character flaws and thrives on intellectual weakness; it is a noxious combination of arrogance and disrespect which anyone can brew on their own, but which our institutions of higher learning carefully breed into their liberal arts graduates. The super stupid postmodernist philosophy that has taken over the universities preaches that there is no reality but power, no morality but its collectivist ideology. But, since reality actually is real, these academic ideologies don't work well in the real world.

The detail that academics and intellectuals fail to understand is that, while reality is real, the reality of physical things and the reality of ideas and meaning are both legitimate, but separate realities. Once you grok this multiplicity of reality, then you can immediately begin to understand that truth only looks subjective because we don't realize that it exists as a matrix, and is defined differently in the different realities, not as one simple scalar value that is the same across them all.

Higher level reasoning is more complicated than we were led to believe. So complicated, in fact, that universities haven't even begun to explore it, let alone to teach it. Super Stupid shows you where the path that leads to it starts to diverge from traditional reasoning, and from there you will be able to see for yourself that the way forward is neither too difficult, nor too long to climb.