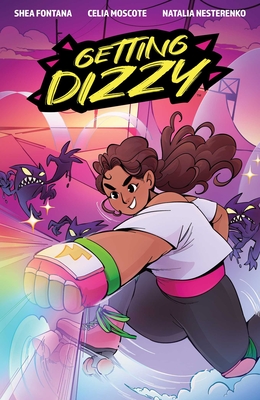 Dizzy is a fifteen year old who wants to be the best! The best at what? She hasn't figured that out just yet. When one idea after another fails, she’s ready to even give up roller skating—until the Negatrixes attack! Under the mantle The ‘Burb Defender, Dizzy finally has a chance to be the best, but only with the help of her skating crew: Chippe, Scarlett, Payton, and Av. But first, she’ll need to learn how to use her colorful powers endowed by the Blaster Bracelet, overcome her self-doubt, and the negative Negatrix energy affecting her crew, not to mention her own personal Negatrix… an emerging Chosen One complex! But, will the ‘Burb Defender and her crew be enough to defeat the Mega-Negatrix? Find out with this new graphic novel from New York Times bestselling writer Shea Fontana (Monster High, DC Superhero Girls), artist Celia Moscote (Juliet Takes A Breath), colorist Natalia Nesterenko (League of Legends), and letterer Jim Campbell (Giant Days). Collects Getting Dizzy #1-4.
Shea Fontana is a writer for film, television and graphic novels. She is currently showrunning the new Monster High series for Nickelodeon and Mattel. Her credits include developing and writing the DC Super Hero Girls animated shorts, TV specials, movies and graphic novels; Polly Pocket (developed, executive story editor, creative producer), Doc McStuffins, The 7D, Whisker Haven Tales with the Palace Pets (wrote show bible and first season), Dorothy and the Wizard of Oz (story editor), and KindiKids; two Disney on Ice shows where she wrote new material for the worlds of Mickey Mouse, Inside Out, Disney Princesses, Finding Dori, Frozen, and other Disney and Pixar properties; and the feature film, Crowning Jules. She has also written for top comic titles including Justice League, Wonder Woman, Batman: Overdrive, Catwoman/Looney Tunes, and contributed anthology pieces starring Deathstroke and Teen Titans. Her first non-fiction book is DC: Women of Action, published by Chronicle.

She lives in sunny Los Angeles where she enjoys hiking, hanging out with her pups, Ziggy and Rizzo, and changing her hair color. Using the secret identity “Shea Q. Off,” Shea played roller derby until her knees forced her into early retirement.