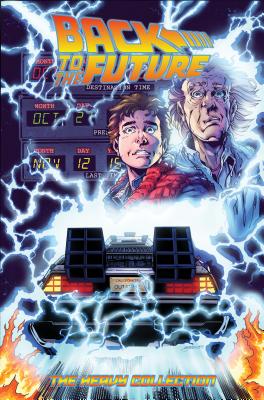 This is book number 1 in the BTTF Heavy Collection series.

Co-creator Bob Gale takes his most famous creations through new comic book adventures that expand the universe created by the blockbuster films!

All-new tales from the twisting and turning timeline that made the movies a pop-culture phenomenon! From the Old West, to the 1980s and into the future of 2035, Doc, Marty, and Biff embark on time-space continuum adventures of epic proportions. Collects 11 stories in all including "When Marty Met Emmet," "Jurassic Biff," "Clara's Story," and the six-part "Continuum Conundrum," where Doc has disappeared in the time stream and Marty is the only one who can find him and get him home!

Michael Robert "Bob" Gale is an American screenwriter, producer and film director. He famously co-wrote the science fiction film Back to the Future, with writing partner Robert Zemeckis, and the screenplays for the film's two sequels. Gale also co-produced all three films, served as associate producer on the 1991 animated TV series, and co-writes the comics from IDW Publishing.

Gale has also written other comics, including Marvel Comics' Ant-Man's Big Christmas and DC Comics' Batman. In 2001, Gale had a short run on Marvel's Daredevil, writing issues #20-25 of Volume 2. Working with artists Phil Winslade and David Ross, they created the story arc "Playing to the Camera." In 2008 Gale worked as one of the writers among the rotating writer/artist teams on The Amazing Spider-Man, which at the time was published three times a month.