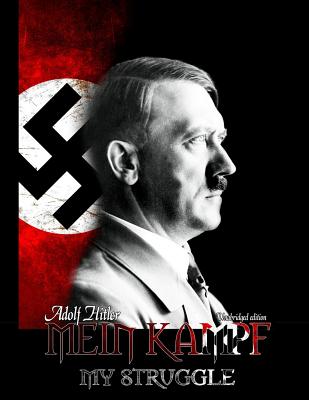 By Ralph Manheim (Translator), Adolf Hitler
This book might be hard to find. Ask a bookseller for more information.
Special Order

In 1922, just four years after the war to end all wars, an unknown Austrian then living in Bavaria planned a pamphlet to be called Settling Accounts. In it he intended to attack the ineffectiveness of the dominant political parties in Germany which were opposed to the new National Socialists (Nazis). In November 1923, Adolf Hitler was jailed for the abortive Munich Beer Hall putsch along with men willing and able to assist him with his writing. With the help of these collaborators, chief among them Rudolf Hess, the pamphlet became a book. Settling Accounts became Mein Kampf, an unparalleled example of muddled economics and history, appalling bigotry, and an intense self-glorification of Adolf Hitler as the true founder and builder of the National Socialist movement. It was written in hate and it contained a blueprint for violent bloodshed. When Mein Kampf was published in 1925, it was a failure. In 1926 a second volume appeared - it was no more successful than the first. People either laughed at it or ignored it. They were wrong to do so. As Hitler's power increased, pressure was put on all party members to buy the book. Gradually this pressure was extended to all elements of the German population. Soon Mein Kampf was even being passed out to newlywed couples as a gift. Ironically, and frighteningly, by the time Hitler came to power on January 30, 1933, what has been considered by many to be the most satanic book ever written was running neck and neck with the Bible at the top of the German bestseller lists. In his excellent introduction to this definitive American translation of Mein Kampf, Konrad Heiden writes: "For years Mein Kampf stood as proof of the blindness and complacency of the world. For in its pages Hitler announced -- long before he came to power -- a program of blood and terror in a self-revelation of such overwhelming frankness that few among its readers had the courage to believe it ... That such a man could go so far toward realizing his ambitions, and -- above all -- could find millions of willing tools and helpers; that is a phenomenon the world will ponder for centuries to come." We would be wrong in thinking that such a program, such a man, and such appalling consequences could not reappear in our world of the present. We cannot permit our selves the luxury of forgetting the tragedy of World War II or the man who, more than any other, fostered it. Mein Kampf must be read and constantly remembered as a specimen of evil demagoguery that people whenever men grow tired of thinking and acting for themselves. Mein Kampf is a blueprint for the age of chaos. It transcends in historical importance any other book of the present generation. In his translation Ralph Manheim has taken particular care to give an exact English equivalent of Hitler's highly individual, and often awkward style, including his occasional grammatical errors. We believe this book should stand as the complete, final, and definitive English version of Hitler's own story of his life, his political philosophy, and his thwarted plans for world domination. Translated by Ralph Manheim with an introduction by Konrad Heiden. A compilation of Hitler's most famous prison writings of 1923--the bible of National Socialism and the blueprint for the Third Reich.