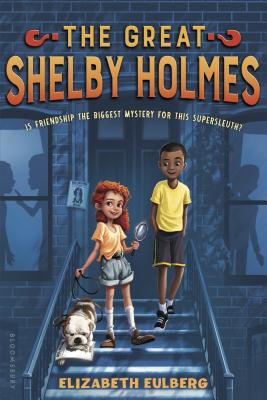 Sherlock Holmes gets a fun, sweet twist with two irresistible young heroes and black & white illustrations throughout, in this middle grade debut from internationally bestselling YA author Elizabeth Eulberg.

Shelby Holmes is not your average sixth grader. She's nine years old, barely four feet tall, and the best detective her Harlem neighborhood has ever seen--always using logic and a bit of pluck (which yes, some might call “bossiness”) to solve the toughest crimes.

When eleven-year-old John Watson moves downstairs, Shelby finds something that's eluded her up till now: a friend. The easy-going John isn't sure of what to make of Shelby, but he soon finds himself her most-trusted (read: only) partner in a dog-napping case that'll take both their talents to crack.

“Who needs Sherlock when you’ve got Shelby Holmes on the case? This smart, funny mystery brings all the charm of the classic Holmes and Watson stories to a fresh, contemporary setting. Watch out readers - the game is afoot!” - Varian Johnson, author of THE GREAT GREENE HEIST and TO CATCH A CHEAT

“In this series opener, Eulberg (We Can Work It Out) creates a lively present-day update of Sherlock Holmes, one with plenty of winks to the source material. Readers will delight in Shelby's ability to read clues in this well-plotted mystery and sympathize with Watson who, along with the rest of the supporting cast, is generally two steps behind Shelby.” - Publishers Weekly

“Fun, fresh and unputdownable. I loved, loved, LOVED it!” - Sarah Mlynowski, New York Times bestselling author of the Whatever After series

“Young Shelby may be hunting for a lost spaniel rather than the Hound of the Baskervilles but she is no less dogged a detective than Sherlock himself. And even a legendary malcontent like S. Holmes or P. Bosch will be moved by the friendship at the heart of this riveting mystery. It’s only logical that you should read it at once.” - Pseudonymous Bosch, New York Times bestselling author of The Secret Series and the Bad Books

“Brisk pacing, likable characters, a few silly Holmes jokes and a diverse neighborhood, carefully and realistically described by John, are ingredients for success. A smart, fresh take on an old favorite makes for a terrific series kickoff.” - Kirkus Reviews

“Will delight readers as they attempt to solve the mystery of a missing dog. Eulberg's middle grade debut is a first purchase for mystery lovers.” - School Library Journal

“Mystery fans may try to solve the case, but most, like John, will enjoy just hanging out with Shelby to see what happens next.” - Booklist

“Readers will delight in Shelby’s ability to read clues in this well-plotted mystery and sympathize with Watson who, along with the rest of the supporting cast, is generally two steps behind Shelby.” - Publisher's Weekly

“Eulberg obviously has a fine time with Holmesian references . . . middle- grade readers . . . may simply enjoy getting in on the ground floor of a new mystery series.” - BCCB