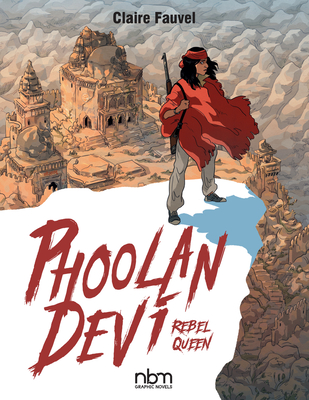 She rebelled against the ancient tribal rules of India, her country, resulting in her becoming a Robin Hood type bandit. Essentially sold at the age of 11 to become a wife for a much older man, she ran away when he raped her. From that point on, there were few choices for her but to join a roaming gang of bandits, her ambition and thirst for revenge leading her to become their rebel chief. Ultimately, society caught up with her and she even became a strong voice for change, women, and social justice as a representative in the Indian parliament. A story of courage and unbending determination in front of centuries of established inequities in the classic Indian caste system.

After studying illustration at the prestigious Ecole Estienne in Paris, Claire Fauvel entered the famous Ecole Des Gobelins to study animation, but adopted comics as a means of telling her own stories. This is her second graphic novel.

"Based on the autobiography of Phoolan Devi (1963-2001), India’s notorious “Queen of the Bandits,” this passionate battle cry of a graphic tribute by Fauvel (Catherine’s War) roots itself in Devi’s early experiences as a member of the oppressed Mallah community of the Shudrah caste, a child bride, and a survivor of repeated sexual violence. Devi is married at 11 and raped by her husband. She’s rescued by her father only to be tormented by men and boys in her village and gang-raped by police. From there, she’s captured by—then joins—a roving gang of bandits, among whom she grows to regional infamy. Throughout, she plots revenge, which she eventually enacts by beating, maiming, and killing men who harmed her or other poor women and girls, and by robbing the wealthy and redistributing funds to impoverished surrounding communities. Her capture, imprisonment, pardon, and subsequent election to Parliament are given shorter coverage in bookending scenes. Fauvel’s loose, scribbly pencil drawings and jewel-toned colors capture both the rare joy and extreme sorrows of Phoolan’s early life, including disturbing, graphic rape scenes. Fauvel portrays Phoolan’s tender expressions of charity, and her love marriage to a fellow bandit, and her most violent acts against the powerful in the same vibrant strokes. This striking biography is as memorable as its vigilante heroine." —Publishers Weekly

Starred Review: "A woman operating with an eye-for-an-eye attitude is a rare and powerful thing, and this heroic tale of Phoolan’s journey from despair and abuse to justice and renown, is intoxicating." —Emilia Packard, Library Journal

"Nevertheless, this brilliant tale is grim and unflinching in the portrayal of the constant assaults and abuses she endured, so you’d better gird yourself for plenty of righteous indignation and outright anger at the catalogue of venality and casual intolerance civilised folk still seem capable of… Potent, unmissable, and primed to continue the fight, this is a book you must read." —Win Wiacek, Now Read This