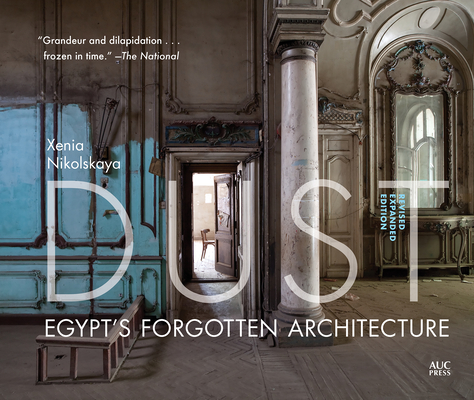 Between 1860 and 1940, Cairo and other large cities in Egypt witnessed a major construction boom that gave birth to extraordinary palaces and lavish buildings. These incorporated a mix of architectural styles, such as Beaux-Arts and Art Deco, with local design influences and materials. Today, many lie empty and neglected, rapidly succumbing to time, a real-estate frenzy, and an ongoing population crisis. In 2006 Russian-born photographer Xenia Nikolskaya began the process of documenting these structures. She gained exceptional access to them, taking photographs at some thirty locations, including Cairo, Alexandria, Luxor, Minya, Esna, and Port Said. These photographs were documented in the first edition of Dust: Egypt's Forgotten Architecture, which soon after its release in 2012 became a rare collector's item. This revised and expanded edition includes photographs from the first edition together with extra unseen images and new photographs taken by Nikolskaya between 2013 and 2021. It also includes previously unpublished essays by Heba Farid, co-owner of the Cairo-based photo gallery Tintera, and architect and urban planner Omar Nagati, co-founder of CLUSTER, an urban design and research platform also in Cairo. Dust: Egypt's Forgotten Architecture leads us seductively into some of the most breathtaking architectural spaces of Egypt's recent past, filled with a sense of both the immense weight and impermanence of history.

Xenia Nikolskaya is an award-winning Russian-Swedish photographer, curator, and teacher currently based in Cairo. A former curator of the Russian National Centre of Photography and former head of Rossiya Segodnya's exhibition project department, she is a Fulbright Fellow with a PhD from Sunderland University, UK. She has taken part in more than forty international exhibitions and her works are preserved at the State Hermitage Museum in St. Petersburg. She is the author of The House My Grandfather Built, which won the 2021 Swedish Photobook Award.Heba Farid is co-owner of the Cairo-based photogallery, Tintera. Omar Nagati is an architect and urban planner andco-founder of CLUSTER, an urban design and research platform also in Cairo.