The Big Book of Conspiracy Theories: History's Biggest Delusions & Speculations, From JFK to Area 51, the Illuminati, 9/11, and the Moon Landings (Hardcover) 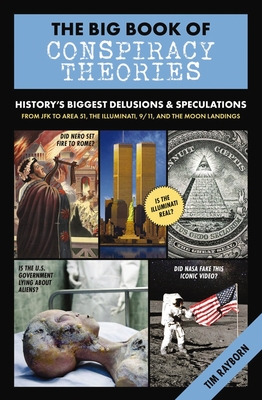 The Big Book of Conspiracy Theories: History's Biggest Delusions & Speculations, From JFK to Area 51, the Illuminati, 9/11, and the Moon Landings (Hardcover)


Backordered
From secret societies to aliens and assassinations, decode history’s greatest cover ups with The Big Book of Conspiracy Theories.

Did America fake the moon landing? Was 9/11 an inside job? What is the government hiding at Area 51? From secret societies to aliens and assassinations, decode history’s greatest cover ups with The Big Book of Conspiracy Theories.

Humanity has long been obsessed with the unexplained, and we have ascribed many mysteries to underground groups and secret schemes. With seeming coincidences piling up around significant events, it’s no wonder so many theories have emerged over the years. But how many coincidences are too many before it becomes a conspiracy? That’s for you to decide. Explore this compelling collection of unexplained circumstances and uncover hidden agendas, startling allegations, and baffling evidence. Unmask the remarkable origins and implications of these theories, including:

Connect the dots between suspicious coincidences and discover the craziest mysteries in the world with The Big Book of Conspiracy Theories.
Tim Rayborn has written a large number of books and magazine articles, especially in subjects such as music, the arts, general knowledge, and history. He lived in England for many years and studied at the University of Leeds, which means he likes to pretend that he knows what he’s talking about. He’s an almost-famous musician who plays dozens of unusual instruments from all over the world that most people have never heard of and usually can’t pronounce. He has appeared on more than forty recordings, and his musical wanderings and tours have taken him across the US, all over Europe, to Canada and Australia, and to such romantic locations as Umbria, Marrakech, Renaissance chateaux, medieval churches, and high school gymnasiums. He currently lives in Northern California with many books, recordings, and instruments, and a sometimes-demanding cat. He’s pretty enthusiastic about good wines and cooking excellent food. www.timrayborn.com