I Keep My Exoskeletons to Myself: A Novel (Hardcover) 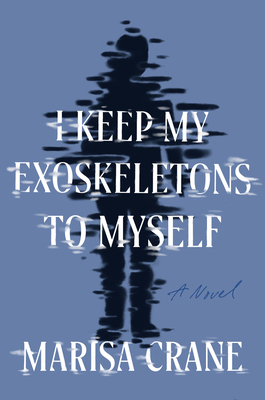 I Keep My Exoskeletons to Myself: A Novel (Hardcover)

“This debut is wholly imaginative and magnificent, both a meditation on queer love and the government’s relationship with our bodies and children. Crane expertly creates a dystopian world grounded in real, fully-formed characters.”
— Adam Vitcavage, Tattered Cover Book Store, Denver, CO

Dept. of Speculation meets Black Mirror in this lyrical, speculative debut about a queer mother raising her daughter in an unjust surveillance state

In a United States not so unlike our own, the Department of Balance has adopted a radical new form of law enforcement: rather than incarceration, wrongdoers are given a second (and sometimes, third, fourth, and fifth) shadow as a reminder of their crime—and a warning to those they encounter. Within the Department, corruption and prejudice run rampant, giving rise to an underclass of so-called Shadesters who are disenfranchised, publicly shamed, and deprived of civil rights protections.

Kris is a Shadester and a new mother to a baby born with a second shadow of her own. Grieving the loss of her wife and thoroughly unprepared for the reality of raising a child alone, Kris teeters on the edge of collapse, fumbling in a daze of alcohol, shame, and self-loathing. Yet as the kid grows, Kris finds her footing, raising a child whose irrepressible spark cannot be dampened by the harsh realities of the world. She can’t forget her wife, but with time, she can make a new life for herself and the kid, supported by a community of fellow misfits who defy the Department to lift one another up in solidarity and hope.

With a first-person register reminiscent of the fierce self-disclosure of Sheila Heti and the poetic precision of Ocean Vuong, I Keep My Exoskeletons to Myself is a bold debut novel that examines the long shadow of grief, the hard work of parenting, and the power of queer resistance.
MARISA CRANE is a writer, basketball player, and sweatpants enthusiast. Their work has appeared or is forthcoming in Joyland, No Tokens, TriQuarterly, Passages North, Florida Review, Catapult, Lit Hub, The Rumpus, and elsewhere. An attendee of the Tin House Workshop and Bread Loaf Writers' Conference, they currently live in San Diego with their wife and child. I Keep My Exoskeletons to Myself is their first novel.

Goodreads, A Buzziest Debut Novel of the Year

"A proponent of prison abolition, the author couldn’t help diving into its potential aftermath under a system that might never shake the impulse to punish and banish . . . Equally central to the novel is an exploration of how grief changes people—the way it can become a personal apocalypse, irrevocably separating 'before and after.'" —Lorraine Berry, Los Angeles Times

"There’s a lot going on in Crane’s hard-to-classify, hard-to-put down debut novel, but at its heart, beneath the gorgeous sentences and gallows humor and speculative-fiction machinations, it’s a survival story." —Patrick Rapa, The Philadelphia Inquirer

"[An] electric debut . . . This book is as sexy as it is dystopic, which is saying a lot." —Emma Specter, Vogue

"Sharply-rendered . . . Interspersed with humor, warmth and love . . . Deeply hopeful . . . A reminder that no matter how dire the circumstances, we still have each other." —Kendra Sitton, San Diego Magazine

"This singular debut offers a fresh peek at our dystopian future, one in which wrongdoers carry around extra shadows as reminders and warnings of their misdeeds." —Karla Strand, Ms.

"A force . . . A journey of rage, healing, friendship, family, love, and in many ways, coming of age . . . An immersive and propulsive story with characters who are deeply human in their vulnerabilities and their resilience." —Sarah Neilson, Shondaland

"While there are obvious comparisons to dystopians like The Handmaid’s Tale or The School for Good Mothers, there are shades of Station Eleven here as well . . . I Keep My Exoskeletons to Myself is a book that will stay with me for a long time. It’s a unique and nuanced read that you won’t want to put down." —Alex Faccibene, Geek Girl Authority

"Elegant . . . The novel stands out in its poetic reporting on the everyday experience of living under incessant observation and enforcement." —Aram Mrjoian, Chicago Review of Books

"I Keep My Exoskeletons to Myself contains multitudes: dry humor, vibrant characters, unapologetic queerness and eroticism, the political manipulation of safety and respectability, the push and pull of mother-daughter relationships, and the questioning of what one says (and doesn’t say) to those one loves most. It is, in sum, a book about guilt, grief, and forgiveness—the hard kind you have to give yourself." —Tara Campbell, Washington Independent Review of Books

"Engrossing . . . Like much of the finest near-future science fiction—including George Orwell’s 1984 and Philip K. Dick’s Minority Report—Crane’s novel shows how disenfranchised individuals can resist and subvert authoritarian powers . . . By centering the novel on a touching, intimate story of a queer family searching for freedom and happiness against all odds, Crane uses speculative fiction to ask how we, too, can create new, more liberatory futures in our present moment." —Daniel Spielberger, Them

"A tale of a uniquely queer form of parenthood and resistance." —Michelle Hart, Electric Literature

"A masterclass in gorgeous writing that sings while also punching you in the gut. Expect to read a novel like you’ve never experienced before and walk away feeling changed forever." —Adam Vitcavage, Debutiful

"While the premise is dark, Crane brings wit and depth to the novel’s characters and their tender relationships. The result: a story that is also humorous and hopeful." —Samantha Paige Rosen, The Rumpus

"A remarkable feat of speculative fiction, its premise so strangely familiar that to call it speculative feels like a misnomer . . . The emotional truths it untangles are so sharp that its intricate world building feels less like fiction and more like an excavation of the country we already live in . . . On the surface, it’s all explosive force; underneath, it’s introspective and intimate. And always, Crane’s prose is gorgeous . . . Some books have the power to wake you up, shake you out of the old and push you toward something new and exciting and a little scary. This is one." —Laura Sackton, BookPage (starred review)

"Crane’s lyrical, thought-provoking novel is as much about the thorny complexities of grief and queer parenthood as it is a quietly horrifying dystopian fantasy . . . Compelling and relatable . . . Brimming with hope, love, and spirit . . . Crane crafts a soft yet fierce narrative of queer resistance and abolitionist feeling." —Booklist

"The author’s profound maturity shines as they interrogate the creation of family, criminalization, and queer resistance. Readers will be moved and electrified." —Publishers Weekly (starred review)

"An intimate, poetic debut . . . Reminiscent of the tenderly ironic confessional voice of Melissa Broder’s novels and the rendering of an eclectic community's search for connection and survival in Emily St. John Mandel's Station Eleven, this novel skillfully probes the complexities of loss, love, and injustice. Writing fiction that convincingly leans toward hope is a challenging task, but Crane does so with self-assured, muscular grace. An anthem for queer love and solidarity that rises above the dystopian cacophony." —Kirkus Reviews