Indigo: Arm Wrestling, Snake Saving, and Some Things In Between (Paperback) 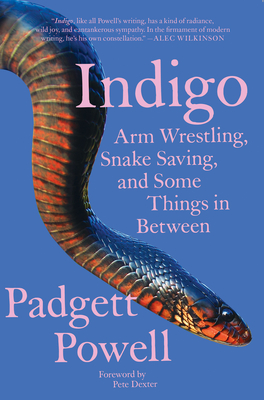 Indigo: Arm Wrestling, Snake Saving, and Some Things In Between (Paperback)


Ships quickly (1-7 days)
The first collection of nonfiction by "one of the few truly important American writers of our time" (Sam Lipsyte).

Gathering pieces written during the past three decades, Indigo ranges widely in subject matter and tone, opening with “Cleve Dean,” which takes Padgett Powell to Sweden for the World Armwrestling Federation Championships, through to its closing title piece, which charts Powell’s lifelong fascination with the endangered indigo snake, “a thinking snake,” and his obsession with seeing one in the wild.

“Some things in between” include an autobiographical piece about growing up in the segregated and newly integrated South and tributes to writers Powell has known, among them Donald Barthelme, who “changed the aesthetic of short fiction in America for the second half of the twentieth century,” and Peter Taylor, who briefly lived in Gainesville, Florida, where Powell taught for thirty-five years. There are also homages to other admired writers: Flannery O’Connor, “the goddesshead”; Denis Johnson, with his “hard honest comedy”; and William Trevor, whose Collected Stories provides “the most literary bang for the buck in the English world.”

A throughline in many of the pieces is the American South—the college teacher who introduced Powell to Faulkner; the city of New Orleans, which “can render the improbable possible”; and the seductions of gumbo, sometimes cooked with squirrel meat. Also here is an elegy for Spode, Powell’s beloved pit bull: “I had a dog not afraid, it gave me great cheer and blustery vicarious happiness.”

In addressing the craft of fiction, Powell ventures that “writing is controlled whimsy.” His idiosyncratic playfulness brings this collection to vivid life, while his boundless curiosity and respect for the truth keep it on course. As Pete Dexter writes in his foreword to Indigo, “He is still the best, even if not the best-known, writer of his generation.”
Padgett Powell is the author of six novels, including The Interrogative Mood and Edisto, which was a finalist for the National Book Award, and three collections of stories. His writing has appeared in The New Yorker, Harper's, and The Paris Review, as well as in The Best American Short Stories and The Best American Sports Writing. He has received a Whiting Award, the Rome Fellowship in Literature from the American Academy of Arts and Letters, and the James Tait Black Prize for Fiction.
"Powell seems to me . . . a champion in the shadows, a rare creature, a delicious hybrid—and a major American writer . . . The volume's 18 essays span four decades and are unified by his unmistakable voice, which in turn makes Indigo of a piece with his works of fiction . . .The prose keeps you going through the pages of Indigo, whatever the subject matter . . .Thank you, Padgett Powell." —Christian Lorentzen, The New York Times Book Review

"Powell is far too good, far too stylish, far too wacky, and certainly far too American to have achieved anything but cult status. But his 10 books, written in his idiosyncratic style, a hysterical Southern gothic mashup of pathos and hijinks, are singular literary creations and the work of a beautiful weirdo the likes of which are nearly an extinct species in the literary world . . . It’s hard to imagine anything with less potential for virality than gumbo or a squirrel, but in the hands of a master like Powell, these trivialities are elevated to the transcendent." —Alex Perez, The Washington Examiner

"Enriching Indigo, melancholies rise through hidden shale. Throughout these essays, with their comic veneer and powerful acerbic energy, the author steers himself and the reader into a deeper blue, and it becomes clear that this is the story of Padgett Powell’s life, or, short of an actual memoir, it may be held in regard as such." —Jeff Calder, The Atlanta Journal-Constitution

"These 18 essays that span 30-plus years highlight Powell’s unique voice and trademark quips." —Wayne Catan, On the Seawall

“Padgett Powell possesses a voice that is unmistakable . . . Whatever subject he turns his attention to, Powell is unapologetically Powell, with his characteristic wit, wicked humor, and unerring nose for a good Southern character.” —Lindsey Liles, Garden and Gun

“Powell is a maestro of the sentence, offering a pleasing blend of high and low, antic energy cut with archaic fustiness.” —Anthony Domestico, Commonweal

"Fans of Padgett Powell’s fiction expect to find in Indigo, his first collection of nonfiction, quirky characters and inimitable prose, and they won’t be disappointed. Another set of readers, unfamiliar with Powell’s catalogue but drawn to this book by ecstatic reviews and superlative blurbage, have a treat in store." —Sean Kinch, Chapter 16

"Memorable reflections on writing and life from an author who pulls no punches." —Kirkus Reviews (starred review)

"This collection captures Powell’s literary gifts, and his generous appreciation of both his Southern roots and the world around him." —Booklist

"[A] winning collection of essays . . . With infectious curiosity and sympathy, Powell covers literature, sports, and the American South . . . Powell’s prose is razor-sharp, and locales such as New Orleans and Bermuda come alive through his shrewd eye and distinctive storytelling. His insightful observations on the craft and teaching of writing are a bonus. This will delight Powell’s fans and should gain him some new ones, too." —Publishers Weekly

"Indigo, like all Powell's writing, has a kind of radiance, wild joy, and cantankerous sympathy. In the firmament of modern writing, he's in his own constellation." –-Alec Wilkinson, staff writer for The New Yorker, author of Moonshine and The Ice Balloon

"Indigo is such a great book—somehow all at once an ars poetica, memento mori, and self-portrait in a convex mirror." —David Shields, author of Reality Hunger and The Thing About Life Is That Someday You'll Be Dead

“Indigo is an excellent book, which I loved. Apart from the expected Padgett Powell things—acuity, comedy, sudden 3D-image-infliction—it develops the character of the essayist over the course of all the pieces in a way that's not un-novel-like." —Adam Levin, author of The Instructions and Bubblegum

"I have just come off of reading Cries for Help, Various, and I am changed. I am indoctrinated. I am a disciple. I am an earnest, resignedly bewildered, fan. . . . A few of these pieces are the kind of ecstatic exercise that some will decry as decidedly not short stories in the classical sense, and others, if you deign to peer beneath the frenetic lunacy, are built with such steel-forged structures that even narrative purists will find them sound." —Los Angeles Review of Books