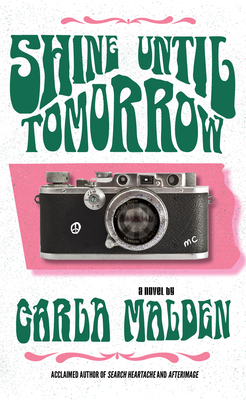 Social misfit Mari Caldwell desperately wants to get on with her life. If only she could get there faster--specifically to Yale--and leave behind all the things that make her anxious: driving a car, crossing bridges, her peers, her parents' divorce. Mari only feels at ease behind the lens of her vintage Leica. Her camera keeps the world--and the people in it--at a safe distance. When Mari comes across an old scrapbook of her mother's, she discovers her white collar parents were once blue denim hippies. She ends up fighting with her mother and storming out. She pedals her bicycle into a downpour, swerves to avoid an oncoming jeep, and flies smack into a tree. Mari climbs into an abandoned VW van bearing the ghost of a psychedelic paint job, and passes out. The next morning, Mari wakes up to the sound of music. A young couple wander through the glen like hippie gypsies, playing recorder and tambourine. Mari accepts their offer of a ride into San Francisco. But something is wrong; Mari can't quite figure out what. The skyline, her father's address, the music on the radio. Everything is slightly off. Except Jimmy, the driver of the van. There's something about him that calms her inner chatter. Only after she says good-bye to the merry band and runs headlong into a war protest does Mari being to realize: it is June, 1967. In the epicenter of the Summer of Love, Mari makes friends with the would-be rock band, meets the grandfather she never knew, and falls in love. In spite of herself, Mari discovers that love changes everything. It even changes her. A fun and touching novel about the people who raise us, the times that define us, and the stumbling blocks on our way to being a grown-up, Shine Until Tomorrow tells the story of a girl obsessed with the future who must visit the past to learn to live in the present.

Raised in Los Angeles, Carla Malden began her career working in motion picture production and development before becoming a screenwriter. Along with her father, Academy Award winning actor Karl Malden, she co-authored his critically acclaimed memoir When Do I Start? More recently, Malden published Afterimage: A Brokenhearted Memoir of A Charmed Life, her own fiercely personal account of battling the before and surviving the after of losing her first husband to cancer. Afterimage is a journey through grief to gratitude that alerts an entire generation: this is not your mother's widowhood. Carla's feature writing has appeared in the Los Angeles Times, highlighting the marvels and foibles of Southern California and Hollywood. She sits on the Board of the Geffen Playhouse. Her first novel, Search Heartache, came out from Rare Bird Books in 2019. Shine Until Tomorrow is her second novel. Carla Malden lives in Brentwood with her husband and ten minutes (depending on traffic) from her daughter.