The Twilight Man: Rod Serling and the Birth of Television (Paperback) 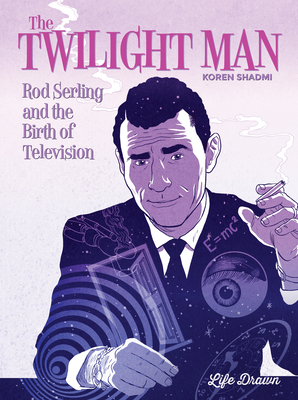 The Twilight Man: Rod Serling and the Birth of Television (Paperback)

Part biography, part history of television as a medium, the story of Rod Serling and his drive to tell a story in the emerging medium prove just as intriguing and surprising as an episode of the Twilight Zone.

— From Jim
A biographical tale that follows Hollywood revolutionary Rod Serling's rise to fame in the Golden Age of Television, and his descent into his own personal Twilight Zone.

We recognize him as our sharply dressed, cigarette-smoking tour guide of The Twilight Zone, but the entertainment business once regarded him as the “Angry Young Man” of Television. Before he became the revered master of science fiction, Rod Serling was a just a writer who had to fight to make his voice heard. He vehemently challenged the networks and viewership alike to expand their minds and standards—rejecting notions of censorship, racism and war. But it wasn’t until he began to write about real world enemies in the guise of aliens and monsters that people lent their ears. In doing so, he pushed the television industry to the edge of glory, and himself to the edge of sanity. Rod operated in a dimension beyond that of contemporary society, making him both a revolutionary and an outsider.
Koren Shadmi is an award-winning illustrator and cartoonist. He studied illustration at The School of Visual Arts in New York where he now teaches. Koren’s graphic novels have been published in the US, France, Italy, Spain, Germany, Poland, Korea and Israel. His latest book, Rise of The Dungeon Master: Gary Gygax and The Creation of D&D (Nation Books), is a collaboration with esteemed tech writer David Kushner. Koren has contributed illustrations and comics to: The New York Times, The New Yorker, The Wall Street Journal, Newsweek, BusinessWeek, Playboy, Mother Jones, The Washington Post, The Boston Globe, Wired and others.
"The Twilight Man” is a wonderfully illustrated, emotional and enlightening story that authentically captures a complicated man and his Hollywood legacy."
— THE MERCURY

"“TWILIGHT MAN pulls back the curtain on Twilight Zone creator Rod Serling.”" - The Hollywood Reporter ""A perceptive take, which celebrates and illuminates one of early television’s true artists."" - PUBLISHERS WEEKLY ""Twilight Man is a respectful but clear-eyed tribute to one of the most important and influential dramatists of the 20th century."" - Alan Brennert, Nebula Award Winner "Having experienced "The Twilight Zone" and "Playhouse 90" first hand, I fancied myself as pretty clued in to the Rod Serling legacy, but I admit I learned a lot from Koren Shadmi's unexpectedly poignant and cleverly observed graphic novel treatment of Serling's life and career. It's a unique take on the lasting work of a complicated man who found his greatest success when coding the messages of his socially conscious narratives into "a wondrous land whose boundaries are that of imagination"" - JOE DANTE "“Very hard to put this graphic novel down … To learn all about [Serling] and the legacy he left behind was a true joy.”" - GOOD MEN PROJECT ""Beautifully illustrated."" - The Twilight Zone Podcast "“Poignant, intensely researched and crisply illustrated.”" - DEADLINE "“Koren Shadmi expertly takes us into a dimension of incredible imagination. The life of Rod Serling is a great American story of determination and invention - and the perfect stuff of a graphic novel.”" - David Kushner, Author of Masters of Doom