First to Fall: Elijah Lovejoy and the Fight for a Free Press in the Age of Slavery (Hardcover) 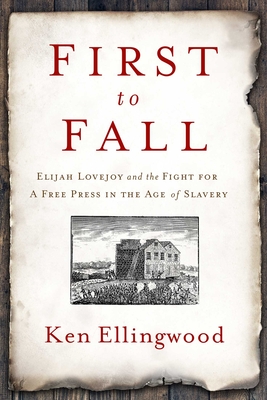 First to Fall: Elijah Lovejoy and the Fight for a Free Press in the Age of Slavery (Hardcover)


On Our Shelves Now
A vividly told tale of a forgotten American hero—an impassioned newsman who fought for the right to speak out against slavery.

The history of the fight for free press has never been more vital in our own time, when journalists are targeted as “enemies of the people.” In this brilliant and rigorously researched history, award-winning journalist and author Ken Ellingwood animates the life and times of abolitionist newspaper editor Elijah Lovejoy.

First to Fall illuminates this flawed yet heroic figure who made the ultimate sacrifice while fighting for free press rights in a time when the First Amendment offered little protection for those who dared to critique America’s “peculiar institution.”

Culminating in Lovejoy’s dramatic clashes with the pro-slavery mob in Alton, Illinois—who were destroying printing press after printing press—First to Fall will bring Lovejoy, his supporters and his enemies to life during the raucous 1830s at the edge of slave country. It was a bloody period of innovation, conflict, violent politics, and painful soul-searching over pivotal issues of morality and justice.

In the tradition of books like The Arc of Justice, First to Fall elevates a compelling, socially urgent narrative that has never received the attention it deserves. The book will aim to do no less than rescue Lovejoy from the footnotes of history and restore him as a martyr whose death was not only a catalyst for widespread abolitionist action, but also inaugurated the movement toward the free press protections we cherish so dearly today.
An award-winning journalist, Ken Ellingwood has been posted in the San Diego, Mexico City, Jerusalem, and Atlanta bureaus of the Los Angeles Times. He is the author of the critically acclaimed (and prescient) work of investigative journalism Hard Line: Life and Death on the U.S.-Mexico Border. He currently lives in Abu Dhabi.

"First to Fall is not just a rich and well told tale; it’s a genetic test for modern journalism, an exploration of foundational American principles— the power of individuals, the fearless defense of a free press, and the deeper values of equality, justice and truth-telling at any cost. The story of Lovejoy’s martyrdom rhymes with the risks of reporters now facing rubber bullets and death threats. Fascinating in its own right, this history is also a bracing parable for our times."
— Nancy Gibbs, former Editor in Chief, TIME, and Lombard Director of the Shorenstein Center on Media, Politics and Public Policy at Harvard Kennedy School

"Anyone who cares about press freedom should read  First to Fall, which tells the unforgettable story of Elijah Lovejoy, a 19th century journalist who fought to end slavery and was killed for expressing his abolitionist views. In the aftermath of his 1837 murder, some of America’s leading lights spoke out and proclaimed that violence and intimidation should never again be allowed to set the parameters of public debate. First to Fall is a gripping historical account with a lesson for our time."
— Joel Simon, author of THE NEW CENSORSHIP and executive direct of the Committee to Protect Journalists

"First to Fall is an ode to courageous journalism – a timely reminder of the painstaking pursuit of truth and the ultimate sacrifice to secure a healthy democracy. The epic, tragic story is about Elijah Lovejoy, a tantalizing figure and the first American journalist killed for his work. Ellingwood delivers a crisp, punchy, page-turner, backed by meticulous reporting. First to Fall is a superb, illuminating read—at an urgent time."

“A penetrating look into a brutal era in American life, and one man who paid the greatest penalty for standing up for freedom of expression. Ken Ellingwood digs into a nearly forgotten time when mobs ran rampant, pistol duels settled arguments, drinking and gambling were national pastimes, and abolitionists were treated as public enemies. Elijah Lovejoy emerged from this perilous world to publish truth to power, at a time when journalism 'often seemed more combat than craft,' and voicing the wrong opinion could literally cost you your life. This is both a compelling, richly detailed biography of a pioneer publisher and a startling portrait of America rife with racial injustice — an upside-down world where calling slavery sinful could incite mass violence, even in a so-called free state like Illinois. That a man like Lovejoy could stand up to such forces, at great risk to his life and career, still resounds almost 180 years later as a valuable lesson in moral courage and the power of the First Amendment — and a story that any reader of history will find captivating and inspiring.”
— J.D. Dickey, author of Rising in Flames and the forthcoming Republic of Violence

“Award-winning journalist Ellingwood's solid biography of this abolitionist newspaper editor whose convictions cost him his life reminds us of the crucial role the press plays in our democracy and how extreme views and the mob violence they stoke must be countered with facts, courage, and justice.”
— Booklist