We hosted an event with this author
1 week 6 days ago
Check here for a signed copy or email us at info@left-bank.com.

Getting It in the Head: Stories (Paperback) 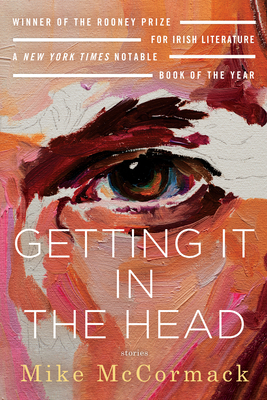 By Mike McCormack
$17.00
On Our Shelves (Note - We update this inventory once per day.)

The acclaimed debut from the author of Booker-listed Solar Bones is a dark, uncanny collection of stunning breadth and audacity.

In this gothic, virtuoso debut collection, Mike McCormack dispenses nightmares both stylish and macabre. “A Is for Ax” offers an alphabetized account of the killing of a parent, while the title story tracks a chilling sibling rivalry. Others tell of a quiz on the road to Calvary, a door-to-door saleswoman trafficking in strange and menacing feats, and a self-mutilating artist pushing himself to the limit. These sly and dangerous stories, balanced on a knife’s edge between life and death, showcase a young writer’s mastery of wicked formal play.

Mike McCormack is an award-winning novelist and short story writer from County Mayo in Ireland. His previous work includes Forensic Songs; Notes from a Coma, which was shortlisted for the Irish Book of the Year Award; Crowe’s Requiem; and Solar Bones, which was a Times (UK) Best Book of the Year, won the Goldsmiths Prize, and was longlisted for the Man Booker Prize. He lives in Galway.

Praise for Getting It in the Head

"Funny, fantastical tales that trample inventively on the toes of sanctimonious news media, provincial pride and the 20th century itself."
—The New York Times Book Review

"Sharp as knives, mixing tongue-in-cheek bog Gothic with metaphysical flourishes and lashings of ultraviolence."
—The Guardian

“McCormack’s first collection of short stories ranges from the west of Ireland to New York to Purgatory . . . A helpless howl of protest that presages not only the end of the [twentieth] century but the end of civilisation itself.”
—Times Literary Supplement

“Remarkable, even at the most extreme moments.”
—The Irish Times