Here in Berlin: A Novel (Paperback) 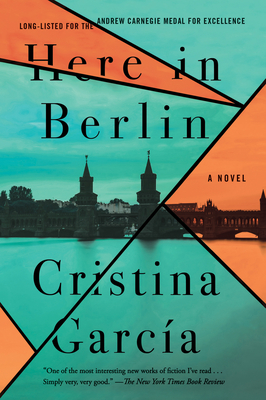 Long–listed for the Andrew Carnegie Medal for Excellence

"Here in Berlin is one of the most interesting new works of fiction I've read . . . The voices are remarkably distinct, and even with their linguistic mannerisms . . . mark them out as separate people . . . [This novel] is simply very, very good." —The New York Times Book Review

Here in Berlin is a portrait of a city through snapshots, an excavation of the stories and ghosts of contemporary Berlin—its complex, troubled past still pulsing in the air as it was during World War II. Critically acclaimed novelist Cristina García brings the people of this famed city to life, their stories bristling with regret, desire, and longing.

An unnamed Visitor travels to Berlin with a camera looking for reckonings of her own. The city itself is a character—vibrant and postapocalyptic, flat and featureless except for its rivers, its lakes, its legions of bicyclists. Here in Berlin she encounters a people's history: the Cuban teen taken as a POW on a German submarine only to return home to a family who doesn’t believe him; the young Jewish scholar hidden in a sarcophagus until safe passage to England is found; the female lawyer haunted by a childhood of deprivation in the bombed–out suburbs of Berlin who still defends those accused of war crimes; a young nurse with a checkered past who joins the Reich at a medical facility more intent to dispense with the wounded than to heal them; and the son of a zookeeper at the Berlin Zoo, fighting to keep the animals safe from both war and an increasingly starving populace.

"Garcia’s new novel is ingeniously structured, veering from poignant to shocking . . . Here in Berlin has echoes of W.G. Sebald, but its vivid, surprising images of wartime Berlin are Garcia’s own." —BBC Culture, 1 of the 10 Best Books of 2017

Cristina García is the author of seven novels, including: Dreaming in Cuban—a Finalist for the National Book Award whose 25th Anniversary edition is coming in March 2017—The Agüero Sisters, Monkey Hunting, A Handbook to Luck, The Lady Matador’s Hotel, and King of Cuba. García has edited two anthologies, Cubanísimo: The Vintage Book of Contemporary Cuban Literature and Bordering Fires: The Vintage Book of Contemporary Mexican and Chicano/a Literature. García’s work has been translated into fourteen languages. She is the recipient of a Guggenheim Fellowship, a Whiting Writers’ Award, a Hodder Fellowship at Princeton University, and an NEA grant, among others. García has taught at universities nationwide. Recently, she completed her tenure as University Chair in Creative Writing at Texas State University–San Marcos and as Visiting Professor at the Michener Center for Writers at the University of Texas–Austin. She lives in the San Francisco Bay area.

Praise for Here in Berlin

“Here in Berlin is one of the most interesting new works of fiction I've read . . . The voices are remarkably distinct, and even with their linguistic mannerisms . . . mark them out as separate people . . . [This novel] is simply very, very good.” —The New York Times Book Review

“An exhilarating orchestration of competing voices and temporalities . . . Here in Berlin is a marvelous palimpsest.” —San Francisco Chronicle

“Garcia’s new novel is ingeniously structured, veering from poignant to shocking . . . Here in Berlin has echoes of W.G. Sebald, but its vivid, surprising images of wartime Berlin are Garcia’s own.” —BBC Culture, 1 of the 10 Best Books of 2017

“García, a transcendentally imaginative, piquantly satiric, and profoundly compassionate novelist, dramatizes the helter–skelter of lives ruptured by tyranny, war, and political upheavals with sharp awareness of unlikely multicultural alliances . . . With echoes of W. G. Sebald and Günter Grass, García has created an intricate, sensitive, and provocative montage revolving around the question: 'Do people remember only what they can endure, or distort memories until they can endure them?'“ —Booklist (starred review)

“With the vividness—and unreliability—of a fevered hallucination, [the characters] tell haunting, and occasionally intersecting, stories that last only a few pages but linger much longer . . . The novel's many excellent characters and their stories combine to create a sense of a city where, as an amnesiac photojournalist puts it, the ghosts 'aren’t confined to cemeteries.'“ —Publishers Weekly (starred review)

“García . . . is a skilled writer, crafting a complete story from the threads of many glimpses. In the assembly of these glimpses, she has created a vivid portrait of a decimated yet surging Berlin since World War II, of individuality and humankind, of terror and resilience. It is beautifully written in a fluent and evocative prose. It is the story of how people live with their pasts. A stunning collection of memories, snippets, and specters.” —Kirkus Reviews (starred review)

“This novel touches on complex themes such as exile, memory, and life in wartime.” —Library Journal

“Here in Berlin is a bold, innovative novel. García gives each speaker just enough space to illuminate lives and choices that might seem shocking in the present, but however uncomfortable they may be, she proves that these stories of war and belief and the failure of moral clarity are ultimately too important for the reader to look away.” —Dallas Morning News

“This exquisite book brings to life the worlds of a number of characters living in Berlin. García is a talented writer, and she delivers a thought–provoking and immersive portrait of the city.” —Bustle, 1 of 10 best fiction books coming out in October

“A vivid portrait of a city in flux, Here in Berlin follows an unnamed visitor as she encounters a host of characters, from a young Cuban POW and the son of a Berlin zookeeper to a Jewish scholar who hid in a sarcophagus for 37 days.”—PureWow, 1 of 50 Best Books for Fall

“The stories that comprise Here in Berlin are beautifully related with a perfectly pitched sense of melancholy and pathos, bound into a delicate yet powerful whole by The Visitor’s own struggles to preserve and renew her sense of self while forming a new perspective to live by . . . García successfully projects this truth by grounding extraordinary stories within the fabric of the everyday, while also defamiliarizing territory we presume to know well.” —Chicago Review of Books

“A compulsively readable, kaleidoscopic novel depicting a multicultural Berlin in the shadow of World War II, transformed by history as well as newcomers from Cuba, Angola, and Russia.” —The National Book Review, 1 of 5 Hot Books of the Week

“Here in Berlin is an impeccable linguistic exercise in narratology and a brilliant exploration of the various identities we adhere to in metropolitan environments. García successfully rehumanizes a German postwar trauma of a populace that for so long coped with the making anonymous of people through genocide, the deadening speed of its capitalist structures, and the oppressive world of East Berlin. As for her readers, García adeptly passes them the torch, giving them a little nook in which they can sit and watch the characters go about their lives, spectating and writing, in the intransitive, the city of Berlin.” —Los Angeles Review of Books

“A strong achievement of diversity—the gradual painting of a mural with many masterful brush strokes, and an expert parroting whose characters’ egotism, recriminations, and melancholy all feel authentic.” —Literal Magazine

“The novel is a tapestry of stories, a museum’s worth of stories, of witness bearers, men and women who have lived through a particular moment in history, and have come out on the other side with a mouth full of narrative . . . Here in Berlin is unflinching in its gaze, introducing us to characters with pasts that might otherwise be buried . . . Though not considered a historical novelist, generally speaking, García’s work often finds itself playing in the sandbox of history, seeking shapes and patterns in the swirls of it. Here in Berlin, I would argue, could be the most important book of 2017, a year that asked so many questions. The answers, we find, are sometimes behind us.” —The Miami Rail

“A quilt of a novel that creates a hypnotic portrait of the former East German city during and after World War II . . . A poetic pastiche of rationalizations and regrets, and a testament to the challenge of reconciling a difficult past.” —BookPage

“A well–written book on people, war, and mystery, each encounter the unnamed visitor, and the reader, has is wonderfully human: equally gritty, hard to bear, joyful, and fascinating.” —BookTrib

“A brilliant novel, by turns hilarious and haunting, gorgeous and brutal, entertaining and profound. Cristina García masterfully weaves an intricate web of history and passion, finely tuned to the subtle music of the soul. Here in Berlin demonstrates exactly why García has so long been an international treasure, one who never ceases to astonish.” —Carolina De Robertis, author of Perla and Gods of Tango

“Here in Berlin is a dream visit to that City you know. To visit this City is to be filled with dark surprise and illuminated insight. It is to be infused with tragic wonder and relentless hope. Will you get home safely? You will. But you will never be the same. And that is the power of this novel by master storyteller, Cristina García. Visitor? No Longer.” —Denise Chávez, author of The King and Queen of Comezón

“Here in Berlin is a haunting portrait of place told through the shifting, kaleidoscopic stories of its people. History’s long and mournful shadow follows us into contemporary lives full of secrets, regrets, and proud enduring. By the end, we are all sifting through the rubble of the twentieth century to find shards of our own buried past.” —Ana Menendez, author of In Cuba I Was a German Shepherd

“A book about endings and new beginnings, of how the past affects our present, the long shadows still cast by the Second World War, and how stories enrich the world and make up a city where the personal and the political are revealed in all their great complexities. García has written a symphony to what has passed away and to what remains and endures.” —Micheline Aharonian Marcom, author of A Brief History of Yes