Nothing Can Hurt You (Hardcover) 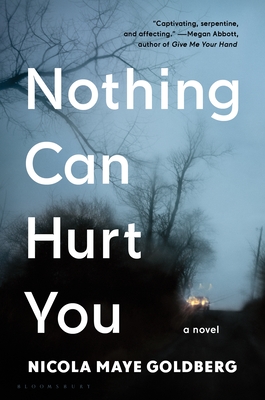 By Nicola Maye Goldberg
$26.00
On Our Shelves (Note - We update this inventory once per day.)

Nothing Can Hurt You weaves a microcosmic, intricate picture of many lives affected by one gruesome act of violence, and their search for emotional resolution in its wake. As Goldberg takes the reader through the stages of grief in their world, her work will have you thinking, wondering, hoping deeply for better in our own.

Reinvents the thriller for a new generation. -Rebecca Godfrey

A beautifully crafted novel with a terrifying story to tell. I couldn't put it down. -Paul La Farge

Inspired by a true story, this haunting debut novel pieces together a chorus of voices to explore the aftermath of a college student's death.

On a cold day in 1997, student Sara Morgan was killed in the woods surrounding her liberal arts college in upstate New York. Her boyfriend, Blake Campbell, confessed, his plea of temporary insanity raising more questions than it answered.

In the wake of his acquittal, the case comes to haunt a strange and surprising network of community members, from the young woman who discovers Sara's body to the junior reporter who senses its connection to convicted local serial killer John Logan. Others are looking for retribution or explanation: Sara's half sister, stifled by her family's bereft silence about Blake, poses as a babysitter and seeks out her own form of justice, while the teenager Sara used to babysit starts writing to Logan in prison.

A propulsive, taut tale of voyeurism and obsession, Nothing Can Hurt You dares to examine gendered violence not as an anomaly, but as the very core of everyday life. Tracing the concentric circles of violence rippling out from Sara's murder, Nicola Maye Goldberg masterfully conducts an unforgettable chorus of disparate voices.

Nicole Maye Goldberg is a graduate of Bard College and Columbia University. She is the author of the novella Other Women (Sad Spell Press, 2016) and the poetry collection The Doll Factory (Dancing Girl Press, 2017). Her work has appeared in CrimeReads, The Quietus, Queen Mob's Tea House, Winter Tangerine, and elsewhere. She lives in New York City.

Captivating, serpentine and affecting, Nicola Maye Goldberg's Nothing Can Hurt You subverts the tropes of the 'dead girl' genre in ways that impart its female characters with a dark majesty and mystery all their own. Megan Abbott, author of GIVE ME YOUR HAND and YOU WILL KNOW ME

Like a gothic Olive Kitteridge mixed with Gillian Flynn . . . [Nothing Can Hurt You] is masterful, a small-scale renovation of a seemingly exhausted genre. Vogue

Fascinating . . . the book is less about the murder itself than about its aftermath, the long tendrils of guilt, sadness, anger and confusion that stretch out from a single act, wrapping themselves around everyone they touch. Sarah Lyall, The New York Times Book Review

Fans of Gillian Flynn's Gone Girl will love Nicola Maye Goldberg's Nothing Can Hurt You. A terrifying and captivating story of a young college girl's murder in 1997, the unraveling web of lies and misinformation, and a serial killer's questionable role in it all will have you turning pages faster than ever. CNN, 25 books that make for a perfect summer read

Haunting, powerful . . . Both immediate and expansive . . . Goldberg makes urgently clear that violence against women is not merely an insidious interloper in our society, but a part of its very foundation. Refinery29, Books You'll Want to Read This Summer

Goldberg's razor-sharp, intricately constructed tale, with its varied voices, will leave few readers unmoved. Fans of literary thrillers will relish this incisive account of murder and its aftermath. Publishers Weekly

Powerful . . . An intriguing look at the ways in which gender violence ripples through an entire community. The Amazon Book Review, "10 Summer Thrillers You Won't Want to Miss"

Nothing Can Hurt You is smart and human and true, simultaneously frightening and tender. Goldberg has written a gripping and tremendously searing book, one that will stay with me for a long time in ways I can't yet entirely imagine. Leslie Jamison, author of THE RECOVERING and MAKE IT SCREAM, MAKE IT BURN

Nothing Can Hurt You is a beautifully crafted novel with a terrifying story to tell. It's about a murder, and yes, there's a serial killer lurking, but the scariest thing here is the way that violence and violation shade their way into innocence and normality. This is one of those novels that makes you take a hard look at everything, starting with yourself. I couldn't put it down." Paul La Farge, author of LUMINOUS AIRPLANES and THE NIGHT OCEAN

A daring, electric debut. As Nicola Goldberg unfolds the mysteries and meaning of a college girl's murder, she tells a riveting story of how revenge, danger, grief and love collide in the aftermath of violence. This novel feels wholly new--Goldberg elegantly destroys all the 'dead girl' tropes we've tired of, and in doing so reinvents the thriller for a new generation--her heroines, like her voice, are wise, darkly funny, and often startingly beautiful. Rebecca Godfrey, author of UNDER THE BRIDGE and THE TORN SKIRT

The pleasure of falling into Goldberg's taut thriller is in some ways a trap, a literary trompe l'oeil that momentarily screens us from what Nothing Can Hurt You is actually about. Investigating the relationships between women, voyeurism and violence, Goldberg elegantly excavates the ways in which crime simultaneously repulses and compels us, she reminds us why we are forever obsessed with looking at things that we are not supposed to see. Alissa Bennett; writer, curator, and co-host of The C-Word

Nicola Maye Goldberg articulates a new kind of darkness within the female psyche-one that makes this book pulse forth with danger and suspense. Between the unexpected turns and the sharp sentences, it's nearly impossible to stop reading Nothing Can Hurt You. Chelsea Hodson, author of TONIGHT I'M SOMEONE ELSE

Nicola Maye Goldberg's novel Nothing Can Hurt You takes a prismatic approach to a murder, and to the harsh reality of violence against women. Her vantage is clear-eyed and unsentimental, rich in both wit and compassion . . . This novel is timely, provocative, and deeply resonant. Mary Caponegro, author of ALL FALL DOWN

A book that reads like music. Nothing Can Hurt You is an intoxicating, lyrical, and honest journey into the traumatic murder of a young woman and its reverberating anguish. Nicola Maye Goldberg is a startling talent, inhabiting different voices and characters to create a reading experience both compulsive and transformative. I could not stop reading this book, and was haunted by it long after I finished. Allie Rowbottom, author of JELL-O GIRLS

"Creepy and compelling, Nothing Can Hurt You examines the many ways that murder produces lasting pain, lingering grief and permanent loss, disclosed in the stories of the wounded. With literary flairand authorial vision that transcends the banality of lesser crime fictionGoldberg draws on two real-life crimes to construct this troubling but touching novel." - Richmond Times Dispatch

"A haunting, explosive tale, it will keep you turning the pages until the very end." - Spy