I've Been Meaning to Tell You: A Letter To My Daughter (Hardcover) 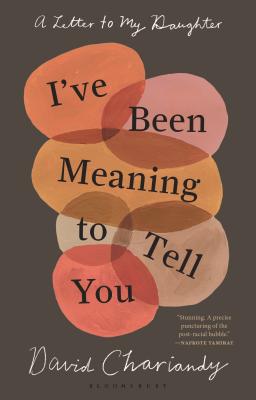 David Chariandy can write a sentence. In fact, he can write a book full of great sentences! In a letter to his daughter, he shares what he knows and continues to learn about being in more than one of many groups of people never fully welcomed. But I was really moved by the strength he sees in her. Great read! - randy's April Staff Pick, 2019

"Stunning. A precise puncturing of the post-racial bubble." --Nafkote Tamirat

For readers of Between the World and Me and We Should All Be Feminists, an intimate and profound meditation on the politics of race today, from prizewinning novelist David Chariandy.

I can glimpse, through the lens of my own experience, how a parent or grandparent, encouraged to remain silent and feel ashamed of themselves, may nevertheless find the strength to voice directly to a child a truer story of ancestry.

When a moment of quietly ignored bigotry prompted his three-year-old daughter to ask, "What happened?" David Chariandy began wondering how to discuss with his children the politics of race. A decade later, in a newly heated era of both struggle and divisions, he writes a letter to his now thirteen-year-old daughter.

The son of Black and South Asian migrants from Trinidad, David draws upon his personal and ancestral past, including the legacies of slavery, indenture, and immigration, as well as the experience of growing up as a visible minority in the land of his birth. In sharing with his daughter his own story, he hopes to help cultivate within her a sense of identity and responsibility that balances the painful truths of the past and present with hopeful possibilities for a better future.

David Chariandy grew up in Toronto and lives and teaches in Vancouver. He is the author of the novels Soucouyant, which received nominations from eleven literary awards juries, and Brother, winner of the Rogers Writers' Trust Fiction Prize, the Ethel Wilson Fiction Prize, and the Toronto Book Award.

“This is a beautiful meditation on what it means to be among a racial minority, and a blueprint honoring one's heritage” —Publishers Weekly

"Remarkable . . . Reminds us of the deep history and connectedness of all human life" - BookPage

"There is, as you pick it up, nothing to prepare you for its power, unless you already know Chariandy’s fiction. He writes slender books that go straight to the heart. His most recent novel, Brother, was about a boy shot by a policeman and the aftermath for his family. It was piercingly moving. But this new book is devastating in a new way because it is nonfiction--and personal" - The Observer

“David Chariandy's letter to his daughter is in turns disquieting, heartfelt, unflinchingly tender, wry; writ large with love throughout. It is, quite simply, one of the most beautiful books I have ever read.” —Aminatta Forna, author of HAPPINESS

“Chariandy's stunning book is a precise puncturing of the post-racial bubble, as well as an incredibly personal and powerful letter. I wish I could have read this when I was growing up."” —Nafkote Tamirat, author of THE PARKING LOT ATTENDANT

“I've Been Meaning to Tell You builds upon foundational discussions of race and gender, layering in intersections of class and citizenship with a flawless hand. Chariandy is smart, tender, and often funny as he weaves together narrative and analysis to navigate perhaps the most complex relationship of all: that of father and daughter.”” —Sara Novic, author of GIRL AT WAR

“A brilliant, powerful elegy . . . pulsing with rhythm, and beating with life.” —Marlon James, Man Booker Prize-winning author of A BRIEF HISTORY OF SEVEN KILLINGS, on BROTHER

“Brother is a surprising, and really shocking novel, unafraid of exploring the overlaps in love, loss, sexuality, race, place, terror and class. It is bold. It is brilliant. It marks the beginning of an absolutely mammoth literary talent.” —Kiese Laymon, author of LONG DIVISION and HEAVY

“A breathtaking achievement . . . A compulsive, brutal and flawless novel that is full of accomplished storytelling with not a word spare.” —Afia Akbar, Observer on BROTHER

“An exquisite novel, crafted by a writer as talented and precise as Junot Díaz and Dinaw Mengestu. It has a beating heart and a sharp tongue. It is elegant, vital, indubitably dope-the most moving book I've read in a year.” —Dina Nayeri, The Guardian on BROTHER

“Riveting, composed, charged with feeling, Brother surrounds us with music and aspiration, fidelity and beauty.” —Madeleine Thien, Man Booker Prize-shortlisted author of DO NOT SAY WE HAVE NOTHING on BROTHER

“Mesmerizing. Poetic. Achingly soulful. Brother is a pitch-perfect song of masculinity and tenderness, and of the ties of family and community.” —Lawrence Hill, author of THE BOOK OF NEGROES, on BROTHER

“Crackles with electric energy . . . An important, vital and groundbreaking book. You really need to read it. It's that good.” —Medium on BROTHER

“Chariandy's often elegiac tone and stately but spare prose establish a compelling melancholic mood. [This] revisitation of familiar territory pays off with its singular observations and insights. A novel with sentences to savour, Brother also rewards an unhurried reader with a poetic vision that while sad is also lovely.” —The Toronto Star on BROTHER

“What can fiction do for us at a time when we are looking to understand other people's truths? As it turns out in this book, everything . . . This book is a high-wire act--a taut, highly visual, time-stopping story . . . filled with moments of swagger and bravery, of recklessness and love that sparks against the dull pain of tragedy . . . With Brother, Chariandy has written a book worth reading through an entire library to find.” —Hannah Sung, The Globe and Mail on BROTHER

“Brother diffracts the spare light toward feeling again, after tragedy. Chariandy deftly assembles that which has come apart in the life of a Black family; their privacies assaulted, their desires unmet. Such a timbrous novel. Such a tender work.” —Dionne Brand, author of WHAT WE ALL LONG FOR on BROTHER