Audience of One: Trump, Television, and the Fracturing of America (Paperback) 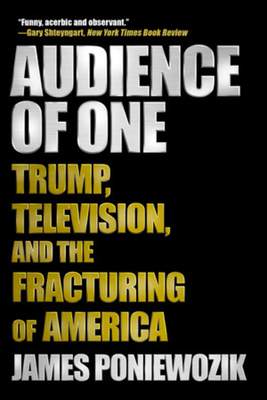 Audience of One: Trump, Television, and the Fracturing of America (Paperback)

Deftly weaves post-WWII media studies, history, and biography to produce a sobering analysis of how a person, who is just as much a character as he is a real human being, ascended to the highest office in the land, and how the conditions of our evolving media environment, and that shape our minds enabled it.

Audience of One reframes America’s identity through the rattled mind of an insomniac, cable-news-junkie president.New York Times chief television critic James Poniewozik offers a “darkly entertaining” (Carlos Lozada, Washington Post) history of mass media from the early 1980s to today, demonstrating how a volcanic, camera-hogging antihero merged with America’s most powerful medium to become our forty-fifth president. In charting the seismic evolution of television from a monolithic mass medium into today’s fractious confederation of spite-and-insult media subcultures, Poniewozik reveals how Donald Trump took advantage of these historic changes by constantly reinventing himself: from a boastful cartoon zillionaire; to 1990s self-parodic sitcom fixture; to The Apprentice reality-TV star; and finally to Twitter-mad, culture-warring demagogue. Already lauded as a “brilliant and daring” (Annalisa Quinn, NPR) work that defines a generation, Audience of One emerges as a classic in cultural criticism.

James Poniewozik has been the chief television critic of the New York Times since 2015. He was previously the television and media critic for Time magazine and media columnist for Salon. He lives in Brooklyn.

The Mueller Report of television criticism! James Poniewozik’s Audience of One is both damning and illuminating, a witty, penetrating exposé of Trump’s most intimate relationship, the one with the medium that made him.