Riding Sky High: A Bicycle Adventure Around the World (Hardcover) 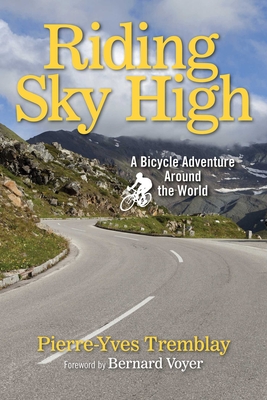 Many dream of dropping everything and just traveling around the world. It’s a common dream, but few imagine embarking on that journey by bicycle. Exposed to the elements, legs burning, all your possessions strapped to you and your bicycle—it doesn’t paint a relaxing picture, but this is just what Pierre-Yves Tremblay did.

Leaving his hometown of Chicoutimi, Quebec, in July 1994, Tremblay took a flight to Europe, and from Paris hopped on his bike and went for a long ride around the world that lasted all of 836 days. He traveled through Europe, past the deserts of the Middle East, then braved the Himalayas, and rode through Southeast Asia and the wilds of Australia, before finishing his journey biking across the United States and arriving back home in Canada.

Besides the sheer physical effort, this epic adventure is about a person confronting himself, alone, with his bike, encountering life, its possibilities and limits, dealing with emotions and everything that compels him to keep going and persevere. It means exchanging greetings and sharing moments with people from many different cultures. It means overcoming hundreds of pitfalls only to keep on going.

Fifteen and a half thousand miles later, this modern-day Ulysses invites us to read the precious journals he kept on his odyssey. Here you’ll find out what really pushes great achievers to their limits.

Pierre-Yves Tremblay took an adventure around the world, traveling more than fifteen thousand miles by bicycle. Tremblay resides in Chicoutimi, Quebec, in Canada.

Bernard Voyer is a French Canadian explorer and mountaineer who has traveled to some of the most hostile places on earth. Over his past thirty years of expeditions and adventures, he has reached the North Pole and the South Pole and stood on the roof of the world, Mount Everest. He is now spinning his globe again, looking for his next big adventure.