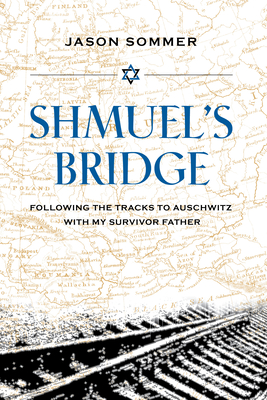 
On Our Shelves (Note - We update this inventory once per day.)
A moving memoir of a son’s relationship with his survivor father and of their Eastern European journey through a family history of incalculable loss.

Jason Sommer’s father, Jay, is ninety-eight years old and losing his memory. More than seventy years after arriving in New York from WWII-torn Europe, he is forgetting the stories that defined his life, the life of his family, and the lives of millions of Jews who were affected by Nazi terror. Observing this loss, Jason vividly recalls the trip to Eastern Europe the two took together in 2001.

As father and son travel from the town of Jay’s birth to the labor camp from which he escaped, and to Auschwitz, where many in his family were lost, the stories Jason’s father has told all his life come alive. So too do Jason’s own memories of the way his father’s past complicated and impacted Jason's own inner life.

Shmuel's Bridge shows history through a double lens: the memories of a growing son’s complex relationship with his father and the meditations of that son who, now grown, finds himself caring for a man losing all connection to a past that must not be forgotten.

Jason Sommer is the author of five poetry collections, most recently Portulans in the University of Chicago’s Phoenix Poets Series. He has been recognized with an Anna Davidson Rosenberg Award for poems about the Jewish experience and read from his work at the National Holocaust Memorial Museum’s program “Speech and Silence: Poetry and the Holocaust.” A former Stanford University Stegner Fellow, he has held a Whiting Foundation writers’ fellowship as well as fellowships from the Bread Loaf and Sewanee writers’ conferences. With Hongling Zhang, he has published collaborative book-length translations of Chinese fiction: Wang in Love and Bondage: Three Novellas by Wang Xiaobo and The Bathing Women by Tie Ning, which was long-listed for the Man Asian Literary Prize. Sommer lives in St. Louis, Missouri.


♦ Poet Sommer (Portulans) movingly combines a Holocaust memoir with an intimate account of his relationship with his survivor father. When, at age 98, his father, Jay, began to lose some of his memories, Sommer was desperate to find a way to preserve them. After escaping from a labor camp in Budapest in 1944, Jay had joined the Russian army and later emigrated to the U.S., where he got his college degree, had a successful teaching career, and built a family. In an effort to keep those and earlier memories intact, Sommer hit upon the idea of showing Jay videos from a trip they had taken in 2001 to eastern Europe to witness the places “that were the setting of his Holocaust experiences.” As the two revisit these memories together, the past and present beautifully collide in evocative prose and excerpts of poetry (“he’s penned beneath/ the stairs of a Budapest apartment house/ for days, in terror”) that whisk readers from the steps of Erzsébet School in Budapest—where Jay and other survivors began their “struggle toward a new life” in 1945—to the bridge where father and son commemorated the death of Jay’s brother Shmuel, who was killed en route to a Nazi camp. This stunning tribute isn’t to be missed.
—Publishers Weekly, starred review

A father-son journey through the land and memories of the Holocaust.
Sommer, the author of five poetry collections, recounts a 2001 visit to Eastern Europe with his Hungarian father, Jay, a Holocaust survivor. Raised in poverty, Jay was sent to a forced labor camp as the Nazis overtook his homeland. Eventually, he was able to escape the camp, evading capture until he joined a Soviet army unit toward the end of the war. The author arranged a trip following the rail lines that figured heavily in his father’s history as well as other family members who did not survive. Of special interest to Sommer was the search for a bridge where his uncle, Shmuel, had escaped the train to Auschwitz, only to be killed by guards. The author provides an undeniably intriguing tale of travel and remembrance, filled with fascinating characters and places caught between the war-torn past and the post–Cold War future. However, the primary narrative focus is on the strained and highly unusual relationship between the author, who was raised during a time of relative peace and prosperity, and his father, aptly described as “an omnivore of terror” who “suffered the most thorough dissolutions of social order” and had law and order shift around him, restricting his life, collecting him for forced labor, while narrowly avoiding what he feared most, the fate of almost all his family.” In exploring the purpose for his journey and this book, Sommer writes, “I would have liked my writing to have cleared a path between my father and me, so we could have had a fuller knowledge of each other.” Writing the book was obviously an act of catharsis for the author, who often brings up his own search for truth, connection, or some other personal need he feels but cannot easily put into words.
A worthwhile work of Holocaust remembrance, but readers must be prepared to journey with the son as well as the father.
—Kirkus Reviews

At first blush, this latest work by poet Sommer (Portulans) would appear to be similar to other Holocaust memoirs. However, Sommer takes readers on a different type of journey by exploring his father’s Holocaust experience and giving an account of traveling to Eastern Europe together in 2001. The goal of their trip was to learn the exact location where his father’s brother, Shmuel, died. Years later, as his father, Jay, begins to experience cognitive decline, the author uses videos of their trip to Eastern Europe and old photographs to stir up memories. This is the poignant story he tells readers, bringing them from his childhood in the Bronx to tracing his family’s footsteps in Budapest and Munich. Throughout the book, Sommer provides insight about extended family and their own Holocaust survival stories, while also offering a glimpse of his complicated relationship with his father. The author helpfully includes maps, photographs, and verses of his poetry to help tell the story. VERDICT A poignant and moving personal history warmly told through reminisces, poetry, and photographs. It will spark the curiosity of those interested in Jewish and European history.
—Library Journal