Suspicion Nation: The Inside Story of the Trayvon Martin Injustice and Why We Continue to Repeat It (Paperback) 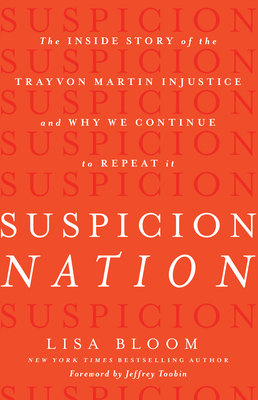 Many thought the election of our first African American president put an end to the conversation about race in this country, and that America had moved into a post-racial era of equality and opportunity. Then, on the night of February 26, 2012, a black seventeen-year-old boy walking to a friend's home carrying only his cell phone, candy, and a fruit drink, was shot and killed by a neighborhood watch coordinator. And in July 2013, the trial of Zimmerman for murder captivated the public, as did his eventual acquittal. In her provocative and landmark book, Suspicion Nation, Lisa Bloom, who covered the trial from gavel to gavel, posits that none of this was a surprise: Our laws, culture, and blind spots created the conditions that led to Trayvon Martin's death, and made George Zimmerman's acquittal by far the most likely outcome. America today holds an unhealthy preoccupation with firearms that has led to the expansion of gun rights to surreal extremes. America now has not only the highest per capita gun ownership rate in the world (almost one gun per American), but the highest rate of gun deaths. Despite the strides America has made, fighting a bloody Civil War to end slavery, eradicating Jim Crow laws, teaching tolerance, and electing an African American president, racial inequality persists throughout our country, in employment, housing, education, the media, and most institutions. And perhaps most destructively of all, racial biases run deep in every level of our criminal justice system. Suspicion Nation captures a court system and a country conflicted and divided over issues of race, violence, and gun legislation.

Lisa Bloom is an award-winning journalist, legal analyst, trial attorney, and is currently the legal analyst for the Today Show and NBC News. A daily fixture on American television for the last decade, Lisa regularly appears on CNN, HLN, and MSNBC. Bloom is also the author of the bestselling Swagger and Think. She has been featured on Oprah, Nightline, Today, Good Morning America, and many other shows. She has written numerous articles for the New York Times, the Los Angeles Times, Huffington Post, the National Law Journal, CNN.com, the Daily Beast, and many more. She has also been profiled, featured, and quoted in hundreds of publications, including the New York Times, the Washington Post, Elle, Ladies' Home Journal, California Lawyer, Vegetarian Times, and Variety. She currently lives in Los Angeles where she runs her law firm, The Bloom Firm.