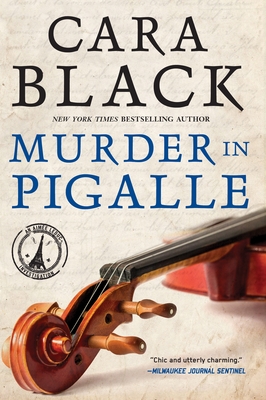 This is book number 14 in the An Aimée Leduc Investigation series.

June, 1998: Paris’s sticky summer heat is even more oppressive than usual as rowdy French football fans riot in anticipation of the World Cup. Private investigator Aimée Leduc has been trying to slow down her hectic lifestyle—she’s five months pregnant and has the baby’s well-being to think about now. But then disaster strikes close to home. A serial rapist has been terrorizing Paris’s Pigalle neighborhood, following teenage girls home and attacking them in their own houses. Zazie, the 13-year-old daughter of the proprietor of Aimée’s favorite café, has disappeared. The police aren’t mobilizing quickly enough, and when Zazie’s desperate parents approach Aimée for help, she knows she couldn’t say no even if she wanted to.
Cara Black is the author of sixteen books in the New York Times bestselling Aimée Leduc series. She lives in San Francisco with her husband and visits Paris frequently.

Praise for Murder in Pigalle

"The stylish sleuth in Cara Black’s blithe mysteries set in Paris, is making an odd fashion statement in Murder in Pigalle—ill-fitting frocks and low heels. Almost six months pregnant and showing it . . . But once the investigation takes a detour into the cavernous sewers of the city, she proves she can still find her way home in the dark."
—The New York Times Book Review

"Leduc is a refreshing and entertaining guide to Parisian neighborhoods and cultures, especially those that well-established tourist routes typically pass by. Let’s hope she never runs out of districts to scoot around in."
—The Seattle Times

"Captivating . . . Black weaves in ’90s politics and a lush sense of Leduc’s Parisian home into the book. In 2014’s Murder in the Pigalle, based on a real-life crime, Paris is gearing to host the 1998 World Cup. Black captures the sensuality of record temperatures, with the description of the cassis-limon ice cream at Berthillon, and the fear that permeates the Pigalle."
—BBC's Between the Lines

"[Black] draws the reader into the intricacies of Paris while driving the mystery forward to make it an ultimate page-turner."
—The San Francisco Chronicle

"Readers will be sitting on the edge of their seats . . . Spectacular."
—Suspense Magazine

"Chic and utterly charming . . . This book has a darker tone than earlier ones in the series, but it still has Black's distinctive flair."
—Carole E. Barrowman, The Milwaukee Journal Sentinel

"One tough mother-to-be . . . The treasured Aimée Leduc series keeps to the high standard of the series while nicely deepening Aimée as a character and leading her in a new direction."
—Barbara Hoffert, Library Journal

"The combination of vividly evoked Parisian neighborhoods and a bewitching, stylish heroine continues to make this series as tasty as a chunk of French chocolate."
—Booklist

"Even an unplanned pregnancy can’t slow down Paris detective Aimée Leduc . . . Black's 14th shows Aimée just as determined as ever to live life on her own terms and stand up for those who can’t."
—Kirkus Reviews

"Black writes [as] vividly as she has in the previous thirteen."
—The Weirs Times

"Of all the books in this series that I've read, Murder in Pigalle is the strongest. I can't wait to see what Cara Black has in store for us next."
—Kittling Books

"If you have followed this series and its central characters you'll not want to miss this latest installment. On the other hand, if you enjoy atmospheric suspense stories with exotic settings and characters and haven't yet followed Aimée Leduc around Paris, this might be the perfect time to do so."
—Bookloons

Praise for the Aimée Leduc series

"So authentic you can practically smell the fresh baguettes and coffee."
—Val McDermid

“[Cara Black] is on to a good thing: each of her novels is set in a colorful Parisian neighborhood—and there are a lot of them. The cumulative result of reading this addictive series is a sort of mini-tour of the city, as seen through a filter of fictional murder . . . Leduc is always a reliable and charming guide to the city's lesser-known corners.”
—The Seattle Times

"Cara Black's Paris-based crime novels have fans by the legion."
—The Telegraph