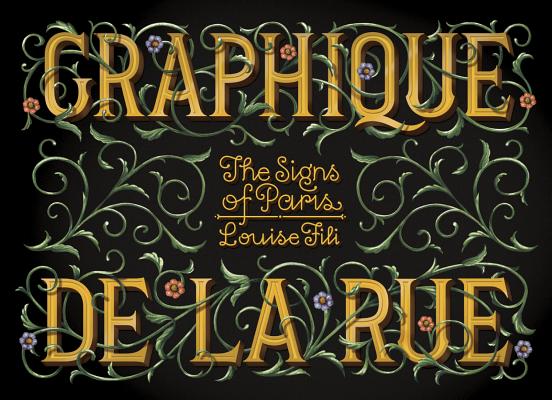 By Louise Fili
$40.00
Email or call for availability and/or price.

Paris is a city of pure enchantment, and everyone who loves the City of Light has a Parisian muse, from the Tour Eiffel to crème caramel. For celebrated graphic designer and incessant flâneur Louise Fili, it's the city's dazzling signage. For more than four decades, Fili has strolled picturesque Parisian rues and boulevards with map and camera, cataloging the work of generations of sign craftsmen.

A major influence on Fili's own work, many of these masterpieces of vernacular design, now destroyed, live on solely in this book, a typographic love letter to Paris sure to inspire designers and armchair travelers alike.

Louise Fili is director of Louise Fili Ltd, a New York-based design studio specializing in branding for food packaging and restaurants. Fili was art director of Pantheon Books for eleven years, where she designed close to 2000 book jackets. She is a member of the Art Directors Hall of Fame, and received the medal of lifetime achievement from the AIGA and the Type Directors Club.

"In this book, Fili has graciously done what so many travelers have kicked themselves for forgetting to do in the City of Light: She documented the design at every corner. A lovely concentrated look at the city." -Print

"...a brilliant book of eye candy that inspires me every time I open it." -BoingBoing

"It's enough to make you want to pack your bags and trace Fili's footsteps through the streets." -Fast Co.Design

"I stand in awe of Louise Fili's achievement in Graphique de la Rue: The Signs of Paris. The range and quality of her selections are exemplary; it's as though one were there, gazing down at the mosaic pavements of the passages or up at vintage neon (which Paris pioneered a century ago)..For graphic designers, this is a must have." -Form

"Fili's book comes at an important time, when such original signs are being replaced by their cheaper, poorly designed, and mass-produced versions..Fili's book is a "typographic love letter to Paris," one that will both immortalize these signs and inspire the imaginations of designers and travelers alike." -Beautiful/Decay

"In the new book Graphique de la Rue: The Signs of Paris, graphic designer and photographer Louise Fili presents hundreds of images that unveil the charm from the City of Light." -Architectural Digest