Votes for Women!: American Suffragists and the Battle for the Ballot (Paperback) 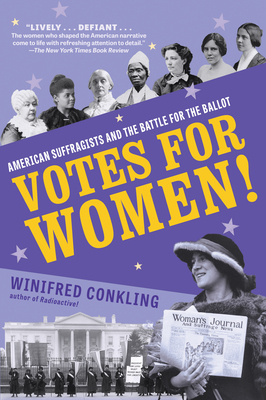 “Lively . . . Defiant . . . Pulling back the curtain on 100 years of struggle . . . The women who shaped the American narrative come to life with refreshing attention to detail.”—The New York Times Book Review

For nearly 150 years, American women did not have the right to vote. On August 18, 1920, they won that right, when the 19th Amendment to the Constitution was ratified at last. To achieve that victory, some of the fiercest, most passionate women in history marched, protested, and sometimes even broke the law—for more than eight decades.

From Susan B. Anthony and Elizabeth Cady Stanton, who founded the suffrage movement at the 1848 Seneca Falls Convention, to Sojourner Truth and her famous “Ain’t I a Woman?” speech, to Alice Paul, arrested and force-fed in prison, this is the story of the American women’s suffrage movement and the private lives that fueled its leaders’ dedication. Votes for Women! explores suffragists’ often powerful, sometimes difficult relationship with the intersecting temperance and abolition campaigns, and includes an unflinching look at some of the uglier moments in women’s fight for the vote.

Winifred Conkling is an award-winning author of fiction and nonfiction for young readers, including Passenger on the Pearl, Radioactive!, Votes for Women!, and the middle-grade novel Sylvia & Aki. You can find her online at winifredconkling.com.

“Lively . . . Defiant . . . Pulling back the curtain on 100 years of struggle . . . The women who shaped the American narrative come to life with refreshing attention to detail.”
—The New York Times Book Review

“[Votes for Women] gives hope that, no matter how broken the system, no matter much our beliefs seem to divide us, change can happen.”
—Chicago Tribune

“This is an absorbing read for feminists, as well as readers who love learning about the history of women. I found it particularly fascinating how many other movements were happening at the same time as the suffrage movement — and certainly, it’s hard not to see those social movements as still relevant today.”
—Book Riot

“This is a fascinating account of the bumpy road to women’s suffrage in the U.S. . . . Well-chosen black-and-white archival reproductions and photographs ably support the text, which makes excellent use of primary sources, including excerpts from letters and writings to bring key personalities to life.”
—The Horn Book Magazine,starred review

"From the first Women’s Rights Convention in Seneca Falls in 1848 to the ratification of the 19th Amendment in 1920, this is a commanding and relevant account of sweeping, hard-won social reform and action."
—Publishers Weekly (starred review)

"Spanning multiple centuries, this work may be the most comprehensive account for young readers about the founders, leaders, organizers, and opponents of the American suffragist movement . . . Conkling delivers a tour de force."
—Kirkus Reviews (starred review)

“Looking for a comprehensive, well-written history of women’s fight for the right to vote? You’ve found it. Conkling draws readers in  . . . this is great for research as well as a good read.”
—Booklist

“The intense drama of the 72-year battle for women’s suffrage springs vividly to life from the pages of this compulsively readable account.”
—School Library Journal

“Votes for Women! details the arduous struggle for women’s suffrage in America with compelling biographical profiles of some of the movement’s key figures . . . Through letters, journals, biographies, photographs, and newspaper accounts, the efforts of the known and unknown women who took up the cause of suffrage are vividly storied.”
—Foreword Reviews

“With a strong storytelling voice, Winifred Conkling offers readers a captivating account of the long-fought battle for women’s suffrage in the United States . . .Votes for Women! is an important, inspiring, and timely book.”
—International Literacy Association