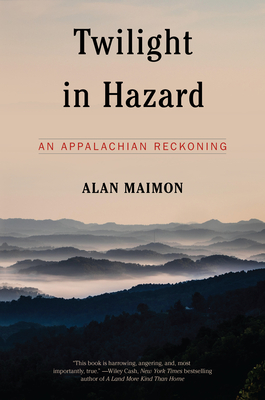 From investigative reporter and Pulitzer Prize finalist Alan Maimon comes the story of how a perfect storm of events has had a devastating impact on life in small town Appalachia, and on the soul of a shaken nation . . .

When Alan Maimon got the assignment in 2000 to report on life in rural Eastern Kentucky, his editor at the Louisville Courier-Journal told him to cover the region “like a foreign correspondent would.”

And indeed, when Maimon arrived in Hazard, Kentucky fresh off a reporting stint for the New York Times’s Berlin bureau, he felt every bit the outsider. He had landed in a place in the vice grip of ecological devastation and a corporate-made opioid epidemic—a place where vote-buying and drug-motivated political assassinations were the order of the day.

While reporting on the intense religious allegiances, the bitter, bareknuckled political rivalries, and the faltering attempts to emerge from a century-long coal-based economy, Maimon learns that everything—and nothing—you have heard about the region is true. And far from being a foreign place, it is a region whose generations-long struggles are driven by quintessentially American forces.

Resisting the easy cliches, Maimon’s Twilight in Hazard gives us a profound understanding of the region from his years of careful reporting. It is both a powerful chronicle of a young reporter’s immersion in a place, and of his return years later—this time as the husband of a Harlan County coal miner’s daughter—to find the area struggling with its identity and in the thrall of Trumpism as a political ideology.

Twilight in Hazard refuses to mythologize Central Appalachia. It is a plea to move past the fixation on coal, and a reminder of the true costs to democracy when the media retreats from places of rural distress. It is an intimate portrait of a people staring down some of the most pernicious forces at work in America today while simultaneously being asked: How could you let this happen to yourselves?

Twilight in Hazard instead tells the more riveting, noirish, and sometimes bitingly humorous story of how we all let this happen.
Alan Maimon is an award-winning journalist and author. As a reporter with the Louisville Courier-Journal, he was a finalist for the 2004 Pulitzer Prize in Public Service for a series about gaping holes in Kentucky’s justice system. His work for the Las Vegas Review-Journal on police shootings and the court system garnered national awards and acclaim. He started his professional writing career in the Berlin bureau of The New York Times. Maimon is a former Fulbright scholar, and currently lives with his family in Hopewell, New Jersey.

"Alan Maimon's reporting on the Applachian town of Hazard, Kentucky is no sentimental or misguided elegy.  It is instead a searing and revealing account of what happens when jobs disappear, institutions collapse, politicians grandstand, and the very middle of America get hollowed out by greed and indifference."— Bryant Simon,  Laura H. Carnell Professor of History at Temple University and author of The Hamlet Fire

“An empathic portrait of eastern Kentucky... Contending that Americans must ‘combat the notion that people and places are irredeemable’... Maimon’s sharp observations and personal stake in the subject make this a standout account of what ails rural America.” —Publishers Weekly


"Maimon writes with a journalist’s clarity and plainspokenness... A somber consideration of a broken region that saves the scolding for its leaders instead of its residents."—Kirkus

"A must read for Kentuckians who love this commonwealth, and for any American who cares about this beautiful, tortured land and the people who inhabit this unique patch of earth.” —Chris Helvey, The State Journal

“Maimon’s Twilight in Hazard: An Appalachian Reckoning brings energy and an insight to a region that for so long has deserved so much more than a death song.” Lexington Herald-Leader


“Twilight in Hazard gives the great FX show Justified a run for its money, and then some.  A riveting read.” —Peter Biskind, author of Easy Riders, Raging Bulls

“Twilight in Hazard chronicles the decades of taking that Appalachia has weathered, but it also chronicles the strength and resiliency of the human spirit of those who have been left behind. This book is harrowing, angering, and, most importantly, true.” —Wiley Cash, New York Times bestselling author of A Land More Kind Than Home

“In tight, compelling prose, Twilight in Hazard takes us directly to the heart of one of America's most serious problems: the decline of local news. This book, with its indelible sense of place, may break your heart but it may also strengthen our collective resolve to find solutions to this crisis before it is entirely too late.” —Margaret Sullivan, media columnist, The Washington Post and author of Ghosting the News: Local Journalism and the Crisis of American Democracy

“Alan Maimon is right to make ‘An Appalachian Reckoning’ the subtitle of this wise, compassionate book, where truly ‘We gather in our memories and reckon up the cost.’ ” —Si Kahn, civil rights, union, and community organizer,  and cofounder of the Brookside Research Project, which supported striking UMWA coal miners in Harlan County, Kentucky