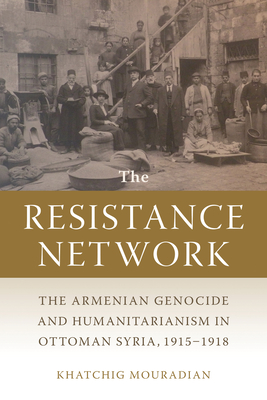 The Resistance Network is the history of an underground network of humanitarians, missionaries, and diplomats in Ottoman Syria who helped save the lives of thousands during the Armenian Genocide. Khatchig Mouradian challenges depictions of Armenians as passive victims of violence and subjects of humanitarianism, demonstrating the key role they played in organizing a humanitarian resistance against the destruction of their people. Piecing together hundreds of accounts, official documents, and missionary records, Mouradian presents a social history of genocide and resistance in wartime Aleppo and a network of transit and concentration camps stretching from Bab to Ras ul-Ain and Der Zor. He ultimately argues that, despite the violent and systematic mechanisms of control and destruction in the cities, concentration camps, and massacre sites in this region, the genocide of the Armenians did not progress unhindered—unarmed resistance proved an important factor in saving countless lives.

Khatchig Mouradian is a lecturer in Middle Eastern, South Asian, and African studies at Columbia University. He is the editor of the peer-reviewed journal The Armenian Review and in 2020 was awarded a Humanities War &
Peace Initiative Grant from Columbia University.

“Khatchig Mouradian has written a pathbreaking book on the Armenian genocide. Using a wealth of untapped sources in multiple languages, he shows how a humanitarian resistance network emerged in Ottoman Syria that saved the lives of many Armenians. The Resistance Network is essential reading not only for the new insights it offers on the Armenian genocide but also for the compelling analysis of humanitarianism and resistance in times
of great atrocities.” —ERIC D. WEITZ, author of A World Divided: The Global Struggle for Human Rights in the Age of Nation-States

I have never thought of any book on the history of the Armenian Genocide as inspiring.  All of them have been illuminating and sobering to the core . . . except this one. Khatchig, in his passionate and clear-eyed commitment to his decades long study and heavy lifting, has taken the blue flame of the pain of the Genocide and churned it into an offering of hope and a sincere reminder to all who resist today and who will no doubt resist tomorrow. We need this book for our souls now more than ever. I hope that Khatchig’s scholarly torch will illuminate and inspire you when you read this masterful book.
— Eric Nazarian