The Divided City: Poverty and Prosperity in Urban America (Paperback) 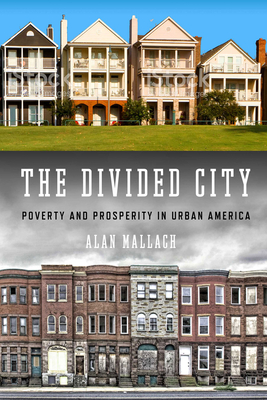 By Alan Mallach
$30.00
On Our Shelves (Note - We update this inventory once per day.)

Who really benefits from urban revival? Cities, from trendy coastal areas to the nation’s heartland, are seeing levels of growth beyond the wildest visions of only a few decades ago. But vast areas in the same cities house thousands of people living in poverty who see little or no new hope or opportunity. Even as cities revive, they are becoming more unequal and more segregated. What does this mean for these cities—and the people who live in them?

In The Divided City, urban practitioner and scholar Alan Mallach shows us what has happened over the past 15 to 20 years in industrial cities like Pittsburgh, Detroit, Cleveland, and Baltimore, as they have undergone unprecedented, unexpected revival. He draws from his decades of experience working in America’s cities, and pulls in insightful research and data, to spotlight these changes while placing them in their larger economic, social, and political context. Mallach explores the pervasive significance of race in American cities and looks closely at the successes and failures of city governments, nonprofit entities, and citizens as they have tried to address the challenges of change.

The Divided City offers strategies to foster greater equality and opportunity. Mallach makes a compelling case that these strategies must be local in addition to being concrete and focusing on people’s needs—education, jobs, housing and quality of life. Change, he argues, will come city by city, not through national plans or utopian schemes.

This is the first book to provide a comprehensive, grounded picture of the transformation of America’s older industrial cities. It is neither a dystopian narrative nor a one-sided "the cities are back" story, but a balanced picture rooted in the nitty-gritty reality of these cities. The Divided City is imperative for anyone who cares about cities and who wants to understand how to make today’s urban revival work for everyone.

Alan Mallach is a senior fellow at the Center for Community Progress in Washington DC. A city planner, advocate and writer, he is widely known for his work on housing, economic development, and urban revitalization. A former director of housing & economic development in Trenton, New Jersey, and a former non-resident senior fellow at the Brookings Institution, he teaches in the graduate city planning program at Pratt Institute.

"Deeply researched survey of the dual processes of revival and decline in American cities large and small… certain chapters, particularly one on gentrification, captivate."
— Booklist

"Picks apart the slow progress in the U.S.'s post-industrial (or 'legacy') cities, and finds that by and large, it's leaving a large portion, mainly low-income and nonwhite, of the population behind."
— Fast Company

"This important new book is a must-read for anyone working to change the course of urban American today, perhaps in Detroit most of all."
— Detroit Free Press

"The Divided City is a must-read. Focusing on the often overlooked Rust Belt region, Mallach counters the dominant narrative of the post-industrial, downtown revitalization happening across U.S. cities by taking an in depth look at the many areas that are seeing the opposite."
— Archinect

"Alan Mallach’s The Divided City is the best and most relevant book written on urban planning and policy in post-industrial cities in the 21st century...[It] is not only packed with information and ideas, but is well-written, enjoyable, and engaging....[it] provides a thorough, nuanced, and much-needed discussion about race and concentrated poverty...vitally important..useful to practitioners, academics, and citizens...a classic on urban planning and policy."
— Cleveland Scene

"A cogent analysis of the current state of play of the nation's urban challenges and opportunities, and will give anyone who thinks about cities a wealth of new information, a powerful perspective on cities and neighborhood change, and some inspirational words."
— City Observatory

"Timely...Mallach...offers a cogent, data-driven analysis of urban polarization, how we got here, and what it will take to create inclusive cities that work for all."
— Shelterforce

"The Divided City makes important contributions towards understanding both gentrification and neighborhood decline....[It]is one of the three most important books on cities that I have read in recent years."
— Housing Studies

"The Divided City interrogates challenging topics with insight and nuance....[It] presents an informative analysis of postindustrial American cities. Mallach starts with a thorough history of urban manufacturing economies and uses relevant data to describe how and why these cities’ neighborhoods are changing, both for good and bad. He details how race and class are fundamentally linked to which neighborhoods are changing and who is affected, and points to successful examples from cities that are working to ensure more equitable growth. This is a worthy topic, and Mallach demonstrates himself a capable narrator and a persuasive advocate."
— Carolina Planning Journal

"The Divided City is a scintillating review of an urban renaissance throughout some fascinating and diverse cities in America....The Divided City avoids the pitfalls of recommending what the author believes is a single, cure-all solution for urban ailments. Mallach allows readers to make assessments of their surroundings, diagnose their surroundings, and make informed decisions."
— Journal of the American Planning Association

"In The Divided City, Alan Mallach expertly charts the decline of America's industrial cities, and explores what has led to their unexpected, and at times unequal, resurgence. By looking at cases across the country—from Detroit to Pittsburgh to Baltimore, and more—Mallach paints a complicated picture of urban inequality in the United States and examines its many causes and manifestations, including its disproportionate impact on communities of color. This book is an essential read for anyone who wants to understand how the forces of structural inequality shape the cities we know and love, and what tools we have as policy makers, nonprofits, and residents to make our cities more just, equal places to live."
— Darren Walker, President of the Ford Foundation

"Always a master teacher, Mallach helps us understand why today's city comeback is so limited and, most importantly, shares optimism and concrete strategies for how cities can chart a new path of equitable development and inclusive prosperity."
— Angela Glover Blackwell, CEO of PolicyLink

"Alan Mallach has written a thought-provoking book that tells the story of many forgotten communities across America. He digs deep and not only highlights past failures, but future opportunities to help breathe life back into these places. This book is an important read for anyone who cares about bettering the community they live in."
— Congressman Dan Kildee

"Alan Mallach—master storyteller, historian, and policy wonk—offers a thorough analysis of the decline of America's legacy cities and the current challenges that they face. He then proposes an interesting future vision for well-governed, resilient places that offer high quality of life and broad-based opportunity for all residents."
— George McCarthy, President and CEO of the Lincoln Institute of Land Policy