The Summer of Beer and Whiskey: How Brewers, Barkeeps, Rowdies, Immigrants, and a Wild Pennant Fight Made Baseball America's Game (Paperback) 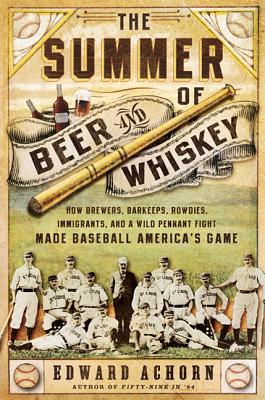 Chris von der Ahe knew next to nothing about baseball when he risked his life's savings to found the franchise that would become the St. Louis Cardinals. Yet the German-born beer garden proprietor would become one of the most important -- and funniest -- figures in the game's history.

Von der Ahe picked up the team for one reason -- to sell more beer. Then he helped gather a group of ragtag professional clubs together to create a maverick new league that would fight the haughty National League, reinventing big-league baseball to attract Americans of all classes. Sneered at as "The Beer and Whiskey Circuit" because it was backed by brewers, distillers, and saloon owners, their American Association brought Americans back to enjoying baseball by offering Sunday games, beer at the ballpark, and a dirt-cheap ticket price of 25 cents.

The womanizing, egocentric, wildly generous Von der Ahe and his fellow owners filled their teams' rosters with drunks and renegades, and drew huge crowds of rowdy spectators who screamed at umpires and cheered like mad as the Philadelphia Athletics and St. Louis Browns fought to the bitter end for the 1883 pennant.

In The Summer of Beer and Whiskey, Edward Achorn re-creates this wondrous and hilarious world of cunning, competition, and boozing, set amidst a rapidly transforming America. It is a classic American story of people with big dreams, no shortage of chutzpah, and love for a brilliant game that they refused to let die.

Edward Achorn, a journalist and Pulitzer prize finalist for distinguished commentary, is the deputy editorial pages editor of the Providence Journal and author of Fifty-Nine in '84: Old Hoss Radbourn, Barehanded Baseball, and the Greatest Season a Pitcher Ever Had. He has won numerous writing awards and his work appears in The Best Newspaper Writing, 2007-2008. His reviews of books on American history appear frequently in the Weekly Standard. He lives in Barrington, Rhode Island.

Kirkus Reviews
“A thoroughly enjoyable re-creation of the gusto, guts, glory and grime of the game's early days.”

Tampa Tribune
“The Summer of Beer and Whiskey strengthens the baseball fan's understanding of that raw, unvarnished era of baseball 130 years ago that eventually evolved into the smooth product we see today. Achorn writes passionately and presents an excellent history lesson.”

St. Louis Post Dispatch
“The Summer of Beer and Whiskey hinges on the hard-fought 1883 pennant race between Von der Ahe's ascendant Browns and the Philadelphia Athletics. The book is rich in newspaper accounts of the race, along with accompanying caricatures of the players. But Achorn also includes insightful digressions on topics ranging from the sport's persistent problems with racism and alcoholism to the peculiarities of 19th-century baseball, which featured barehanded fielders, one umpire per contest, and pitchers who could take a slight running start before each throw.”

Bill Littlefield, NPR's "Only a Game"
"The author makes a convincing case that it was an exceptionally entertaining time to be a baseball fan in St. Louis."

Providence Journal
"Edward Achorn ... favors us with a realistic and colorful look at early professional baseball."

The Daily Beast
"The time machine travels back to the 1880s as brewer Chris von der Ahe purchases the forerunner of the St. Louis Cardinals, with the singular purpose of selling more beer."

Los Angeles Times
"When it comes to baseball history, Edward Achorn has carved out his own territory, re-animating the 19th century game."

The New Yorker - The Sporting Scene blog
“Combining the narrative skills of a sportswriter with a historian's depth of knowledge and stockpile of detail, Achorn has produced a book that is both entertaining and informative.”

The Ft. Wayne News-Sentinel
“The Summer of Beer and Whiskey” is full of great stories and interesting tidbits of history.”

Library Journal
“Achorn…takes us back to when baseball was expressed in two words and one league—until the American Association was founded in 1882.”