Cambodia's Curse: The Modern History of a Troubled Land (Paperback) 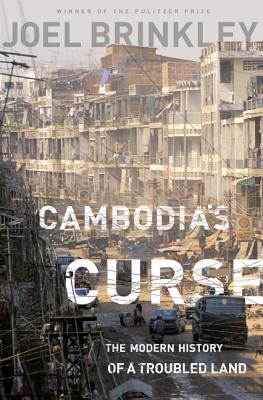 A Pulitzer Prize-winning journalist describes how Cambodia emerged from the harrowing years when a quarter of its population perished under the Khmer Rouge. A generation after genocide, Cambodia seemed on the surface to have overcome its history -- the streets of Phnom Penh were paved; skyscrapers dotted the skyline. But under this faÃ§e lies a country still haunted by its years of terror. Although the international community tried to rebuild Cambodia and introduce democracy in the 1990s, in the country remained in the grip of a venal government. Pulitzer Prize-winning journalist Joel Brinkley learned that almost a half of Cambodians who lived through the Khmer Rouge era suffered from P.T.S.D. -- and had passed their trauma to the next generation. His extensive close-up reporting in Cambodia's Curse illuminates the country, its people, and the deep historical roots of its modern-day behavior.

Joel Brinkley, a professor of journalism at Stanford University, is a twenty-three-year veteran of the New York Times. He has worked in more than fifty nations and writes a nationally syndicated op-ed column on foreign policy. He won the Pulitzer Prize for International Reporting in 1980 and was twice a finalist for an investigative reporting Pulitzer in the following years. Cambodia's Curse is his fifth book.

"Brinkley cuts a clear narrative path through the bewildering, cynical politics and violent social life of one of the worlds most brutalized and hard-up countries."
—Foreign Affairs, May/June 2011

"An excellent...account of a country whose historic poverty, exacerbated by the Vietnam War, remains remarkably unchanged."
—Kirkus, February 15, 2011

"A heartbreaking but vital status report on a people who deserve far better."
—Booklist